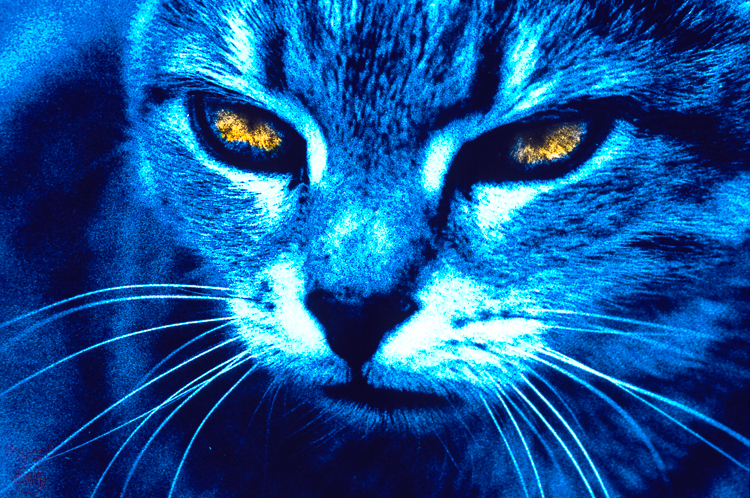 This is the picture of one of the likely most photographed animals - a normal house cat.
Specifically "Muschi", the cat of my parents neighbours.
I took the picture already in 1999 on Kodak TMAX 3200 - a film I love because of it's phantatsic grain, also visible in this picture.
Is used my Canon EOS50E and a EF 100/2,8 Makro lens to take this shot when the cat was lying under a bench in the garden, using normal daylight. Lucky, if you like animals and they do so as well. Muschi always came to me when I was at my parents home, and so in fact it was not too complicated and just little waiting to get here in such a position, calm enough to get here in good focus.

The picture itself was nice, but at that time I was experimenting a lot with "analogue" techniques, and had bought a B/W coloring set called Colorvir, which offers many possibilities when intending to manipulate black and white pictures or slides.

So I got a picture from the negative and started: First a blue dyeing of the whole picture. The I used the chemical substance NaOH to bleech the eyes - done with a small brush. After drying this result anyother dyeing of the eyes in yellow followed.

The "tiger" was complete, and I liked the grainy, color-contrastful result. Although myself being a littlle bit more in favor of dogs, cats have a very special way of spellbinding people. It's a part of the view, always a little bit mysterious, and their independant behaviour shwoing, that they are the boss. So keep on looking for your "tigers"- nice pictures can't exclusively be taken in Afrika or Canada!