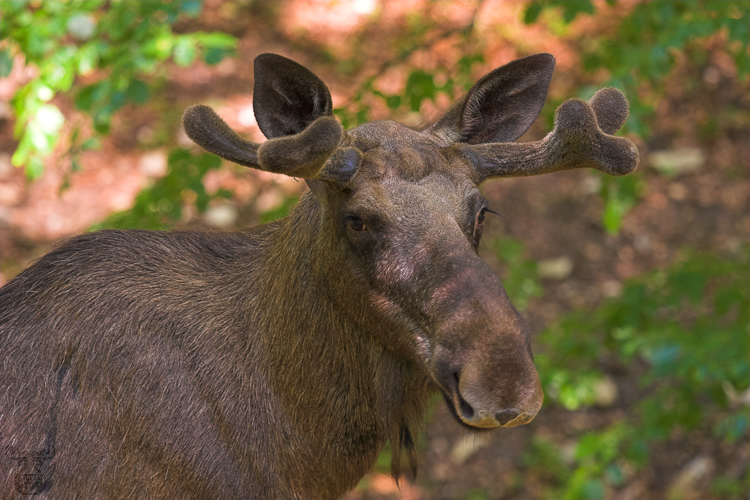 It's my favorite model - Lars, the "original" bull moose from the nearby wildpark Hundhaupten. Lars entered the stage in December 2003 (a Christmas present ?), together with the moose cow Lotta. Both gave some practical examples of reproduction during the recent years and enabled the opportunity to study moose just in front of my door.

It is intriguing to both see the antlers of Lars growing year by year - approximately in 2-3 years he will be in his prime and his rack will then reach it's maximum size - amazing remembering the small studs when I met him first. And seeing the incredible speed of the young calves (mainly twins up to now) growth during the first weeks and months. It's just reality which fascinates me most, after all the time of reading only about the facts which can be followed "live" in the park. Maybe this is the important main task of such facilities - can people - especially children - get a personal connection with nature without getting in touch ?

The picture however was a special one for me - normally Lars is rather shy and long tele lenses are the only way. Additionally I mostly saw a lying or sleeping Lars, one just feeding, or one in an un-photographic position. And if - the light was usually bad, the film was finished or I was there without camera. This time he was close to the fence, he took his time to study myself likely wondering about this crazy guy with his gear. And he was in both good light and in front of acceptable background rather than a fence. I seldomly had luck to find a model (they would either avoid such unproffessional photographers or just get too expensive) - Lars did so. His eyes' expression gives me the feeling he secretly smiled about my efforts on the other side of the fence ...