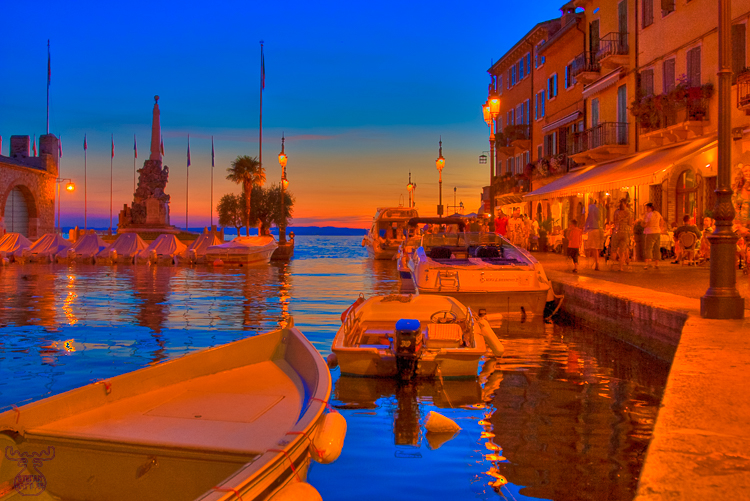 Extreme object contrast often kills evening or night shots as shadows drown and lights are overexposed. HDR (High Dynamic Range) is the resource of choice in some cases - just take several pictures of exactly the same object with different exposure values and merge them afterwards at the computer.

In many cases HDR works pretty well with already 3 differently exposed pictures. Most of today's SLRs offer AEB (Automatic Exposure Bracketing) so that three differently exposed shots can be taken - using  continous drive mode - automatically in a row in the absolut minimum lag in between the pictures. Taking this and a reasonably calm hand many "special" shots are feasible even without tripod (not recommended though, but used for this image).

The fusion of these pictures usually does not yet give an appealing image. Tone mapping, i.e. transforming the (too) high dynamic range to a printable result - is possible with many tools available on the market, which also offer corrections for slight disalignments between the shots (no tripod) or even ripple corrections, e.g. when objects move in between the exposures.

The options given in the tonemapping process exceed the pure optimisation of critical exposures and offer possibilities to alter the images from a painting like look up to artifical flavors regarding image impression. So choose whether you just like to increase the dynamic exposure range or even add some more or less arty touch to your pictures.

HDR itself entered the public stage when digital photography and processing became popular. The idea itself is much older and was - on an analogue base - already used by early photographers. HDR might  lead to another discussion about analogue versus digital photography: Is an HDR image still "real" photography or already ranks among image manipulation techniques such as combined pictures, complete compositions or altered contents? You have to decide for yourself ...

The image itself was taken (with three exposures separated by 1,33 stops each) during August in Lazise Harbor at Garda Lake (Italy).