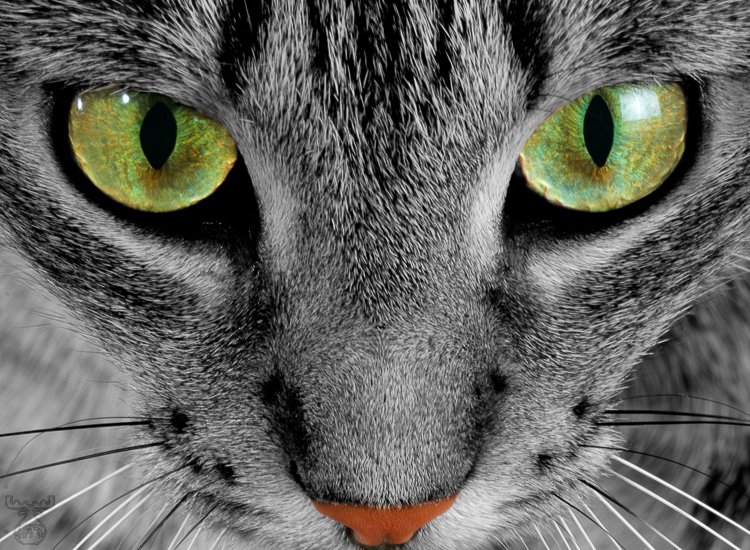 Again a picture without wildlife character - but character is for sure present. Our tomcat "Tigger" (named after the famous Walt Disney character due to the bouncing capabilities both share) had to pose for this close-up picture.

Just 15 shots it took to get one picture where my jumpy beast was frame filling and in focus. The rest is just standard electronic picture processing - most easy with layer technique: Copy the picture to a second layer and change the top layer to black and white. You see now a totally black and white picture. Then apply a layer mask on that top picture and carefully paint those areas, which shall get colourful again, in the layer mask black. The pixels from the layer with the mask will vanish, where you put black colour on. The advantage is, that with white colour in the mask you can repaint erroneous black areas again - nothing is lost.

Some years ago -before the PC came into play with picture editing, I did a similar thing on a black and white print with dip dying followed by brush and paint.  Followed by a repro of the print on slide film the same kind of job took a black and white film roll, some prints of it, dyes and lots of smut in the bathroom, several tries and a slide film for repro, adding up to 1-2 weeks of interrupted work with substantially higher material costs.

Today I use my digital SLR and don't care for material. Some minutes later the pictures are transferred to the PC, the selected picture manipulated without risk and struggle and the result saved. Golden digital world? Not really - some things are easier and faster, but the environment costs nerves and money - and dying of black and white prints was fun, too !