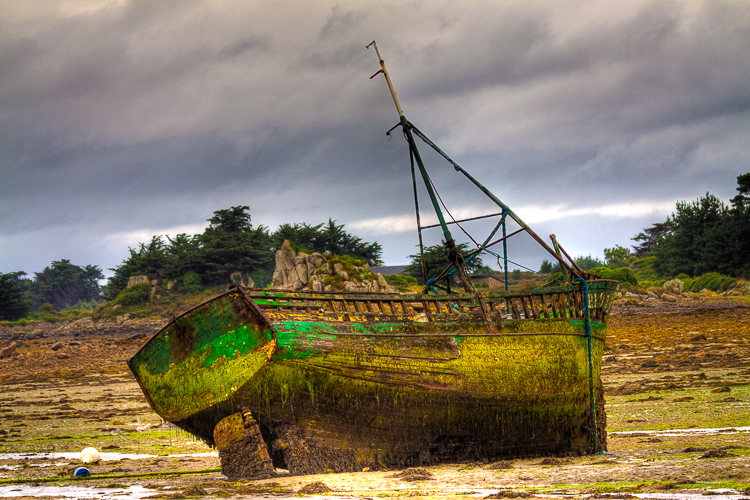 Left to it's own resources
Sich selbst überlassen

Leaving the main roads can pay off. When cruising  the coastline in the region of Côtes-d'Armor in Northern Brittany, we followed that advice - not only because our navigation system pretty often sent us on the small roads obviously believing they could be used with similar speeds than larger state roads. Which didn't work out as many of them didn't deserve the title "road" - farm track would have been more appropriate.

This time the surprise hit us twice: The "road" showed up to be a track over water (in high tide) - also our navigation system showed we were actually in the middle of the sea. Luckily it was low tide, and we just followed a number of French cars neatly dodging deep potholes in the sandy sea floor.

The second astonishment was a lonesome and wrecked ship lying on the side, covered with seaweed. It obviously was left to it's own resources for quite a while already. Even more obviously nobody intends to change the status of this special way of waste disposal.

Such photographic opportunities can be found frequently in Brittany, and at this very special time it made my day, which was in fact a rainy and uninviting one with a very low potential for interesting pictures. In order to face the pretty high contrast I used HDR technique.

Just another case of the special fascination for old stuff overtaking me when finding old, historic and mysterious items. My wife and son were happy that the walk to the remains of the ship was impassable this time.