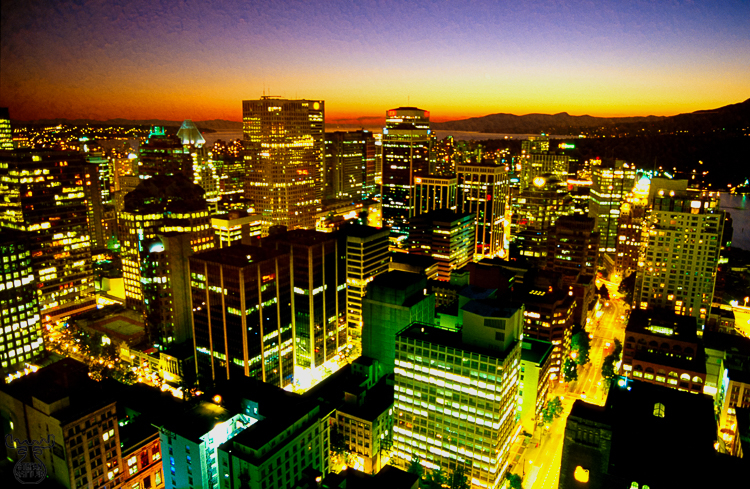 A picture already some years old - in 2000 on a phantastic trip to Canada I will never forget. Although being mainly on the search for nature, glaciers, bears, moose (!) (without success on that topic though) and landscapes, one city impressed me extraordinarily: Vancouver

A really international city of expectional beauty - and space. Stanley park with the Lost Lagoon would give enough possibilities for (nature) photography filling the whole year: Lots of animals, such as squirrels, birds and racoons, in the middle of the city. Additionally beautiful outlooks onto the sea. A phantastic city to live in - congratulations to all having this privilege!

But also the non-natural attractions are impressive - and so we used the view from "The Lookout at Harbour Center"-a high tower with restaurant and viewing platform- to get an overview-and some pictures. It was just the time the sun went down, so perfect conditions with lights in houses and skyscrapers already on, but still rests of evening light over the horizon.

Funny to see, that lots of other tourists-mainly using point-and-shot cameras- didn't even think about disabling their flashes. Likely a more depressing moment they received their prints from the labs taking into account, that the viewing platform was paned and perfectly reflected every flash. Additionally I had to use time exposure with many seconds to get the picture above, so the others likely had mainly a black background with a bright flash point in the picture. One thing I also missed: a tripod, at least a small one usable on the balustrade, which in the end facilitated to keep the camera still for the exposure time even without tripod.

But without a ballustrade things would have looked differently, so a tripod - even if always being inconvenient to carry - often differentiates the snapshooter from the successful photo freak. So I resolve to take the unpleasantness as often as possible - but still too seldom ...

Use your light,
your Mr. Mooseman !