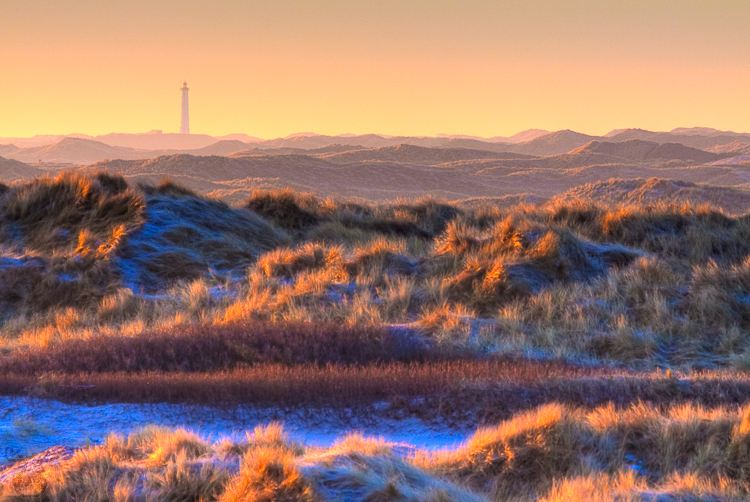 Snow and ice are not landmarks of Denmark's West coast at the Jutland peninsula. The North Sea usually relates to a rather smoothed out temperature curve at the coastline. Visiting Søndervig, situated at the North End of the Ringkøbing Fjord directly at the North Sea, over New Year's Eve in 2009 revealed an unknown landscape to me.

The location is my personal favorite and my most visited vacation area. I never had seen it that icy before. Traveling on the side roads covered with thick ice emerging from melting snow during daytime, which had frozen over night, became risky. Even walking the dog became dangerous, specifically when our dog strained at the leash following a tempting spoor of rabbits or hares.

In such harsh outside conditions I tend to stay as long as possible in my cozy and warm bed in the morning. Photography is my passion, but nothing can replace some extended snoozing. It was likely a premier, that I made it two times during the few days of winter vacation to stand up early enough to enjoy the sunrise (which in winter luckily is much later). It was worth every minute and any fight with the inner temptation shouting to stay in-house.

This image was one of the results of freezing and nearly missing the breakfast (even worse than standing up early :-). The warm, incident light from the sun creeping above the horizon contrasting the bluish snow in the dips formed the foreground, while mainly pastel colors surrounded the distant lighthouse. The impression was enforced by using the HDR technique bringing up contrast to an acceptable level.