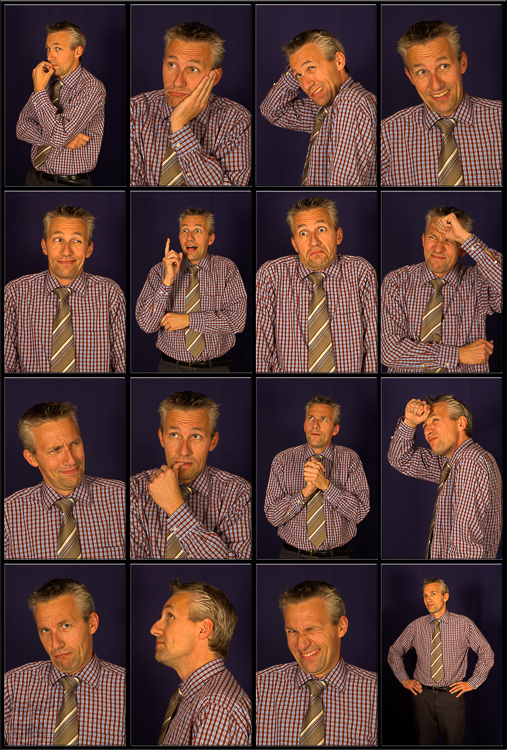 I'm not sure whether I named the picture following "vernissage", "homage" or "collage". I am sure where "Klaus" comes from, as the guy is replicated 16 times in this potpourri of expressions.

The basic pictures were taken in 2006, when a good friend of mine, Klaus, asked if I could take some shots with him and some colleagues related to a play of the local theater group "Junges Theater". The idea was to produce material for posters and flyers for advertising purposes. More being focused on nature, travel and experimental photography, I was neither sure I would make it nor if it would be fun doing so.

It was fun just trying a different color of photography, and although we just did a "low budget" shooting in the props room of the small theater within two hours or so, I filled two 2GB Flash cards with over 400 pictures in the period. Fact is, that taking pictures of "pros" is so much different than with family or friends. It's so much easier actually, as gestures and poses come naturally from an actor without asking, as it's part of their repertoire (and I envied those persons mainly for their huge text storage capacities before). Some technical gear such as my studio flashes used for the pictures help for better quality and being fast enough to catch more or less any change in expression ...