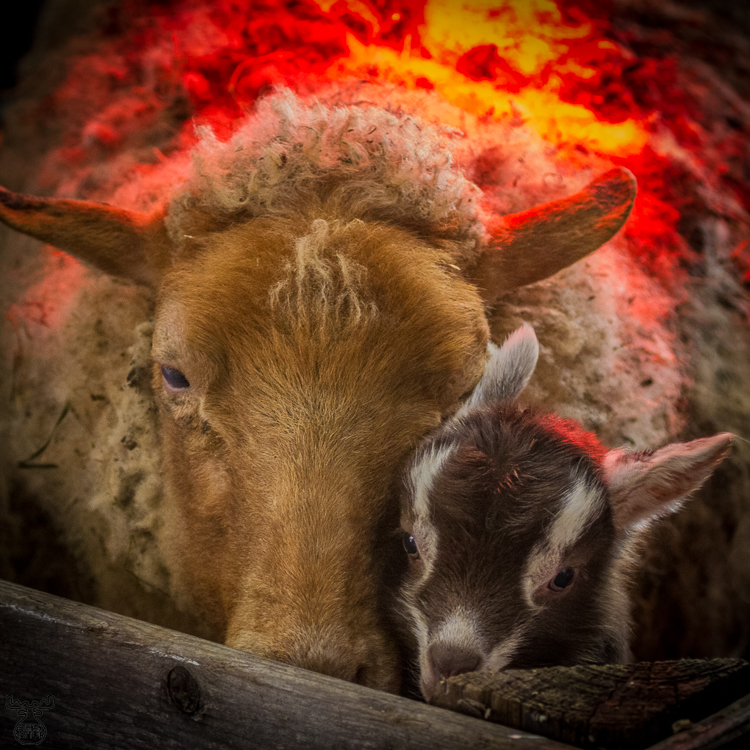 It was an involuntary community between sheep and young goat - the hardships of an unhappy reality brought them together. While the young kid was rejected by his mother, the sheep had severe health related problems after she had given birth. Both found together in a small enclosure under a heat lamp for the hope of recovery.

When visiting my favorite wildlife park in Hundshaupten after a (too) long period of absence, I intended to look for the wolves, lynx and moose first of all (accompanied by my camera of course). It was one of the first warm spring days after a ways too warm and ways too uncomfortable pseudo-winter. Vast amounts of visitors entered the park and all available parking areas were occupied. It is a a stroke of good fortune that I can contribute to the wildlife park by providing some images now and then for ads and their web pages - which on the other hands gives me the privilege to park inside the parks premises.

When passing by the park buildings we realized a small enclosure inside one of the barns - it was shining like a beacon due to the red heat lamp above the shed. The two uneven friends seemed to help each other to overcome the hard times. A heartwarming situation in fact.

They found together in suffering - and survived! Lucky two - thanks to their friendship and the tireless commitment shown by the park staff taking care so caringly for any creature.