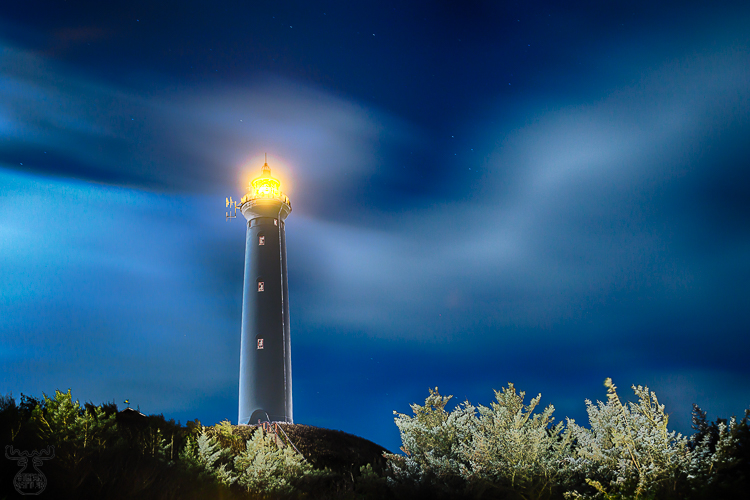 It is definitely my personal star - Nr.Lyngvig Fyr in Denmark's west coast at the North Sea.

I am dealing with that lighthouse for about 40 years now (maybe slightly less when it comes to photographing it) - but there are always new views, angles and experimental approaches to the building and it's environment.

Photography is eternal. When you believe you have ultimately taken any intersting image of a subject, just give it some time, new ideas, new techniques, new light conditions, another season - or maybe just another mood.

While the moving clouds were smoothed by a 30s exposure time (tripod recommended ...), the master image is a blend of a few images with different exposure corrections.

This gives the lighthouses flare a chance to still show contrast and not drown in a massive overexposure. The trees and shrubs in the front as well as the lighthouse itself were painted wit light - using a really strong flashlight (LEDlenser X21) during a long exposure time.

The image is definitely not a "native" one only created in the viewfinder with one click´. If done so, the flare would be a bright mass outshining the complete top the lighthouse, the front with the trees would be just a black shadow, just as the tower itself. The clouds might still show a slight amount of structure, being almost black as well.

Decide yourself what your image should look like - "honest" photography, a standard HDR, some weird manipulation ending in an abstract image or ... no matter - you should like it.

I already have new ideas in mind when we meet up again - my lighthouse star and me.