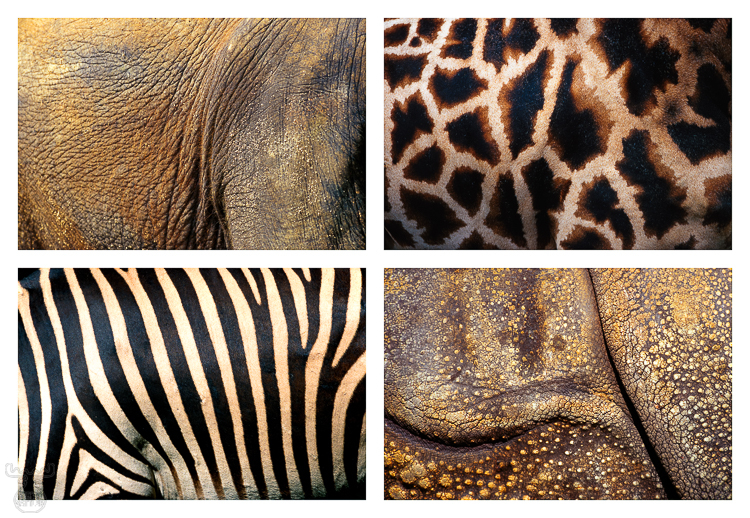 This picture shows the skins of four animals :

All pictures are taken in 2001 during summer time. Due to the fact that my wife and myself didn't spend the holidays "off-road", but stayed in Germany, we used the time to visit several zoos and wildlife parks in more or less close vicinity to our home (maximum distance was 400km actually). Nothing compared with a trip to Canada or Scotland, but amazingly good to watch animals - and take pictures.

And test new equipment: The photographs were taken with the EF300/4.0 L IS USM, which I tried really first time during this period. By means of the image stabilizer of that lens, the pictures got really sharp without a tripod, a real help and a fantastic invention.

The slide film was my new favorite because of the more than vivid colours: Kodak EBX 100 ("Extra colour")-it earns it's name.
Actually my wife brought the idea up to make a real series out of the pictures, and those four will not be the end. On the shown picture the four originals are digitally merged to one picture.

The zoo-sessions must have given my environment a perception of fanatism: A guy -in  the middle of the summer at 30 °C - running around with a huge photo backpack on his back, wearing a photo-jacket and carrying his camera with tele lens like a child in his arms. A friends of photographing faith - don't care about sneering faces around you!