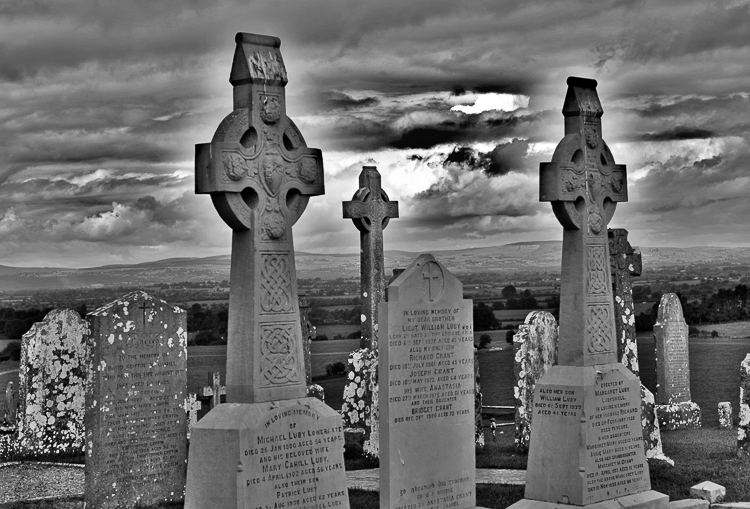 In Ireland you find many mystic places. Graveyards are some of them, and the celtic high crosses are part of that imagination. They are called "high" crosses as the cross piece is located fairly high on the upright column.

The original color picture - taken at the Rock of Cashel in County Tipperary in Ireland - was already nice, but did not express the feelings the right way. Making the picture black and white and increasing the contrast (always a good choice in black and white) made it look the way I felt it should be.

Actually it was not a pure contrast correction, but a combination of two layers in the picture editing - the decolored picture and a softened version of it. Some areas were masked, so that the contrast change could be controlled and applied in a selective manner. Pure manipulation? Yes, but not really so much different from "analogue" techniques applied in black and white print exposure in the darkroom. At least the picture itself and it's contents were not altered ...

Black and white was always a point of interest. Beforehand quality was only possible when developping the film and the print in your own darkroom by hand. Now it's just a mouseclick to turn color to black and white, and darkroom-techniques can be applied without chemicals, mess and lots of wasted material when trying to find the best exposure ... bygone times, which had their value ...