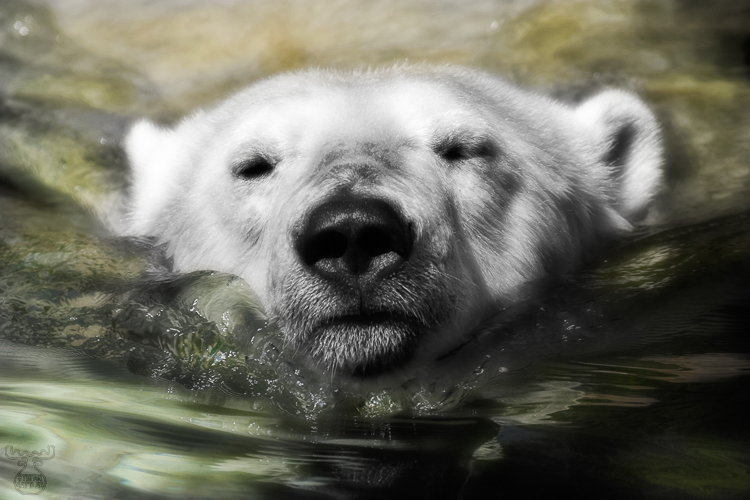 Taking the media coverage related to "Flocke", the polar bear cub born in Nuremberg's zoo (Tiergarten) in December 2007, he is for sure a world star. It feels strange and amazing, that the success story as seen before in similar situation in Berlin's Zoo with the polar bear "Knut" recurs once more - an international mass interest with rapidly emerging marketing potential regarding cuddly toys, dedicated web pages and online shops, diaries (ever seen a polar bear writing?), DVDs, postcards and many more. Did you ever see a similar worldwide attention for the protection of the polar bears in natural habitat? At least the publicity of Flocke might open minds for those bears in the Arctiv really requiring our help.

Back to the title: Living close to Nuremberg we regularly visited the zoo over the recent years. I enjoyed the polar bears playing, though feeling (as for many animals caged) slightly sorry for those impressive beings locked in a nice, but still too small environment compared to their natural habitat. Of course I took pictures (many of them). It was usually an acceptable level of visitors in the large-area premises of the zoo, so photography - also of the polar bears - was fairly easy, althought the height of the glass walls required some stretching.

I feel, these times have passed for the upcoming period - until "Flocke" will decline the hills of world celebrity - just by growing to a normal polar bear instead of a cuddly cub. I won't even try to encounter the masses pilgrimaging to the zoo and consequently polar bear enclosure, where - instead of unhurried viewing - organized tours can be expected.

That were some of the thoughts when selecting the picture for the monthly favorite section. The picture was taken in Nuremberg's zoo just a few months before "Flocke" was born. The picture is altered with selective contrast and color contrast techniques, forming another member of my "in art" portfolio as up to now mainly used on Ireland and Denmark pictures.

P.S. Don't take me too seriously - I am not a fanatic antagonist of Flocke or visiting the zoo at the current point in time - everybody has to decide for himself.