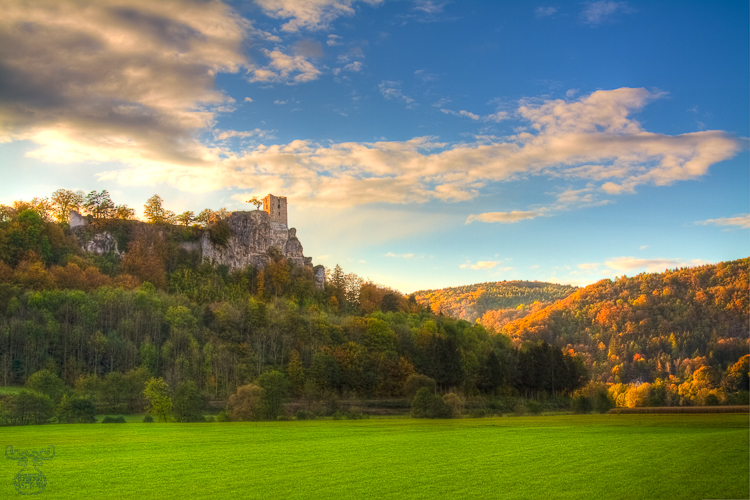 The castle ruin Neideck is situated in the Franconian Switzerland not too far apart from my home town. But do you know the feeling of knowing some of the locations visited during a vacation ways better than your own vicinity? So this was the first time I took the chance to take some pictures, just heading back home after a workshop a few kilometers away.

Fortunately the light was pretty good . Still too much contrast. Crap.  And a gradual grey filter would have been suboptimal due to the shift between the hill and the valley. HDR helps out again (I love the technique as you might have observed checking other pictures on this web). Both the trees below the castle lying in shadow as well as the bright sky keep their contrast without blooming or drowning shadows. A real picture book image, which might have been painted as well.

Neideck castle was built around 1050 BC, although first settlements are recorded back to 1000 AD. What could such a monument tell about it's past, all the wars, changes in ownership, visitors and just the normal life of it's inhabitants over the centuries? I think thoughts like that make up the fascination of ancient buildings.

Just in 2008 an archaeological park as well as stairways allowing to climb the remains of the tower were opened - living history. But it's too close to where I live - I have not yet managed to visit it :-)