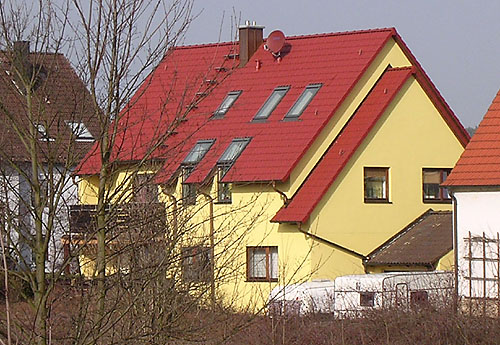 ... is not reached yet, but it's close! Like every project it gets finished by 95%,  and the rest will take forever. But who cares - may it take years, the worst is done after one year of construction work.
Many of the webpages' visitors during that period might have given up hoping for anything happening - no new pictures, no pictures of the month or any other movement at all (thanks all for the guestbook entries through that time - at least something happening).
This hibernation time might be over, although new pictures will be very rare the coming months, as we did not have any vacation, nor will we have this year. In the meantime I have nearly forgotten, how to use my SLR camera (not the small digital one used for keeping evidence of the house's progress though).

This picture of the month shows  the almost finalized house,  as well as the following pictures. Some larger work packages are still outstanding, but it is a house again one can live in ! All folks only interested in photographic information on this web may forgive me for zoning out with this boring house stuff from the drawn line of photographing and travelling info - finally it was more than a year of total devotion to another topic than photography, so see it as an excuse for all the lost pictures of the month and lacking updates.

Time to get some impression on the inside. The following samples may give a feeling of the achievements - they cannot give you the slightest idea of what it takes to come there, though. To avoid threatening everyone still toying with the idea of (re-)building his own house, I do not give any "before-during-after" presentation of house or rooms. If somebody is interested - you are welcome to visit us, but I need to test your mental and physical health before showing those pictures :-)

You might ask - "One year of time for a small little house with a normal interior?". All those enquirers have either never built a house or have enough money just to "outsource" all tasks. We had many craftsmen involved, but still have worked from beginning to the 95% end every free minute ourselves. It's fun looking back now, but we never would start such a project again. What's actually a pity now knowing so many pitfalls by heart, which we couldn't even think of before starting.

Now it's all about the remaining 5 % - but I will promise to better myself and save some time for photographing and the web !

Never give up, Your Mr. Mooseman