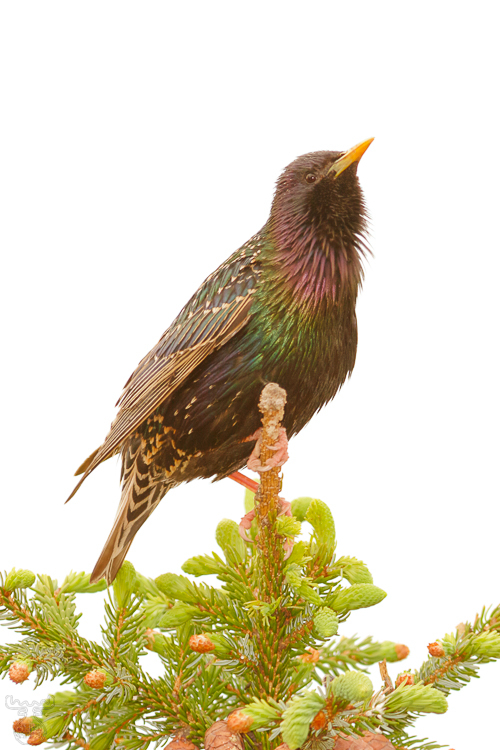 Starling on the top
Spitzen-Star

After years of struggling I have bought my first digital SLR - a Canon EOS 20D with 8.2 megapixel. I don't regret. Although total resolution with a normal slide film scanned is higher, I believe for most situations 8 megapixel is appropriate (and to be honest - how often did I make large format prints in a size, that 8 megapixel wouldn't be enough?)

One thing I have additionally revised regarding any earlier planning: I will not run double tracked with digital AND analog body as planned before. If I think about vacation photography: I believe, I would never take some pictures digital and some other analog, e.g. landscapes with slide film and animals digitally. I anyhow cannot create "real" slideshows afterwards, and the double effort and the need, to anyhow carry lots of slide films with me, are not enjoyable. So I sold my 20-35mm already and bought the Canon EF 10-22/3,5-4,5 (equivalent to 16-35mm in film) in order to keep my wide-angle range also with the EOS 20D.

I will check the (dis-)advantages of digital photography more the coming months, so maybe I drop some lines every now and then in this section. Only so far up to now: When you have overcome the initial trial phase, where you slide back into your photographical beginning (not thinking enough about what and how to take a picture, but just to shoot), there are new opportunities analog photography did not have. Most convenient is just to delete pictures you don't like or which are blurred. Most proffessional is the histogram, which allows fast control of the exposure, phantastic especially in critical situations just as this picture of the month.

A bright, dull sky without texture in the background. A dark starling sitting on a peak of a fir. Wind shaking the fir. 300mm lens with 2x converter needed to obtain a format-filling picture. Sounds like a horror scenario for photography. It is.

Unless you use a digital SLR. You still need quite some shots and patience before you get an un-blurred picture, where the bird is looking into your direction, especially with mirror lock (and the rest of the pictures? Just delete them ...). But after some pictures and checking the histogram and visual result, you have found a good balance between flash and exposure correction. So the sky gets white (who cares in case of a dull one?), but on the other side you can suddenly identify the starling's feathers in it's full colours. I didn't even know they are that phantastic.

Don't think, just with a digital camera things change and photography gets easier. It's juts another tool with new opportunities, which I personally like. You have to take your own tries to find out. I just say: Make your own investigations before demonising one or another.

Take it analog or digital - just have fun,
your Mr. Mooseman !