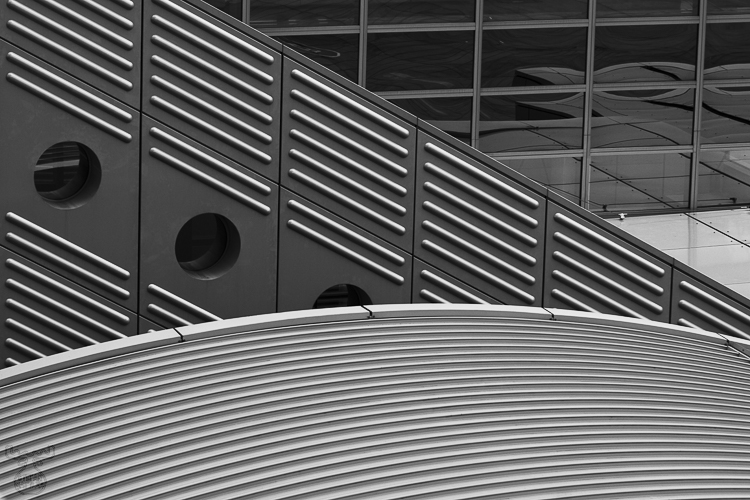 After a short vacation in May 2008 we passed Frankfurt airport on our way home. As children - in particular male ones - show a natural affinity to technology and specifically air planes, we stopped by for a few hours. The airport interior I knew before mainly from hurrying through the aisles in order to reach the connection flight in the antipodal terminal from the one I arrived with 30 minutes delay shortly before. Actually the building had enough potential for both my son (watching in awe) and me (photographing in awe) for a whole day.

Anyhow we took the chance to get a full safety check so as to enter the visitor outdoor platform, from which one can see a whole terminal and several - in Frankfurt largely frequented- runways. While departing and arriving planes as well as the ones just getting boarded on the ground captivated my son (watching in awe) and my wife (shivering in fear - her fear of flying never gets lost), I found some of the buildings more attractive for my lens.

Straight and curved lines, futuristic metal coats as well as glass elements of nested and close buildings - from a high perspective due to the visitors deck height - caught my attention. Although only having my 24-105mm available (it would likely have taken 30 minutes more to pass the security check with my whole backpack) I was able to catch some of the sightings as I had them in mind.

Some work back home with Lightroom - mainly changing to black and white and optimizing the curves -  transformed the primary terrestrial buildings into a space station scenario (it did so for me, maybe I just watched too many Star Trek episodes ...)