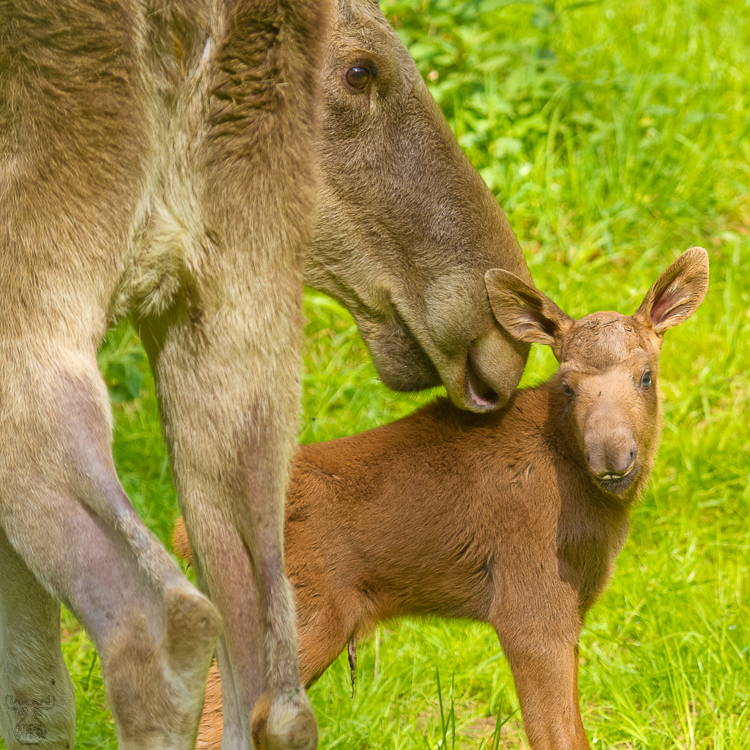 I call it marvel - just after seeing the light of day for the first time, young moose stand up within hours. This young calf was born 7 hours before the photograph was taken (just a few days ago). With still wobbly legs it rose and walked along with the moose cow - the mother. After a few days this calf will be able to run faster than a human. It will gain 50 to 100 grams weight per day in the first weeks, then up to 2kg a day after 6 weeks - thanks to the fat-rich, very nutritious milk, which contains up to 24% rigid contents and is two times more concentrated than normal cow milk. Up to 10 times a day, the calves drink up to 2 liters a day!

With this very special calf I observed something I have never spotted before - the calf has blueish-rimmed eyes compared to the brown eyes I believed is standard even for new-born moose. A good friend - the director of the park - told me that this is not uncommon and can be found at other animals as well. For some species the size of the remaining ring can even be used for the determination of the animal's age - I will follow up on the calf to find out.

The two moose bulls - Lars, who is the father of the calf and the yearling from last year - were displaced to the very other corner of the large enclosure well knowing, that a moose cow is very protective after birth (although I realized it gets less critical year by year).
The two bulls were lying in exactly the same position side by side, and I was overtaken by the feeling, that both even had the same irritated thoughts and feelings about the situation: "The same procedure as last year" - "Why do we have to stay here in the corner while the lady and the babies have all the rest for themselves?" - "If we at least had a beer keg".

Again my "moose lady" Lotta had born twins this year. While I still had seen the second calf when taking this photo, it did not survive it's second night. Nature. I cross fingers for the remaining one.