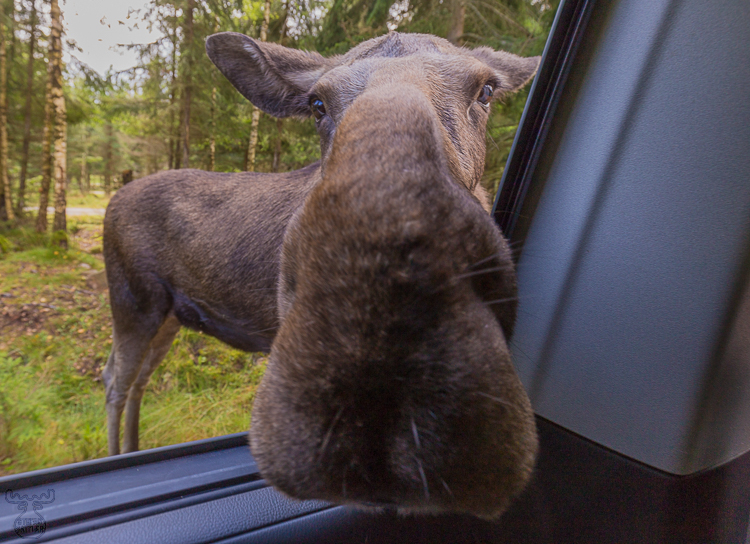 Time again for another moose image. This time it is a really close one taken at 16mm. The cow was in near vicinity (some sobber remaining at the lens hood after the images had been taken).

This does not happen out in the woods. But it does when you are visiting a safari type moose park in Sweden - the Smålandet Älgparkm in Markaryd. You can use your own car or join a tourist train type of thing. I recommend the own car, the slobber can be easily removed from car interior and exterior afterwards (as well as from the camera).

However you choose - you MUST have some foliage with you. The moose have a clear contractual binding, that they will be immediately punished when they get closer to a car than 1,7 meters, if the vistors do not show any signs of interest in feeding. The foliage has to be visible and offered by the vistors before the moose is allowed to cross the 1,7m border. If the moose is caught entering the critical zone without a clear indication of foliage or other digestable matter, he will be suspended for at least two weeks. A persistent offender will be expelled from the park and has from that point to care of food by itself.

We didn't want to be the reason for a criminal offense of any of the moose, so we took care to have enoughs twigs with us, so the moose can enter legally. The moose are also organized in trade unions, some cow moose were on duty at lunch time when we visited the park. Just in time before the end of their shift we passed by. Despite that fact they were still hungry as other visitors had not remembered to bring essential amounts of foliage (luckily a mini bus as ours is perfect for carrying large photography equipment and even larger amounts of twigs)..

After we had fed all leaves and twigs, the cow wanted to make sure our car was clean and was not contaminated with any rest of plants - she personally inspected the cars interior, partially us, definitely the camera lens and the mobile phone my wife took photos with, and left after the shift bell had signalled the end of work.