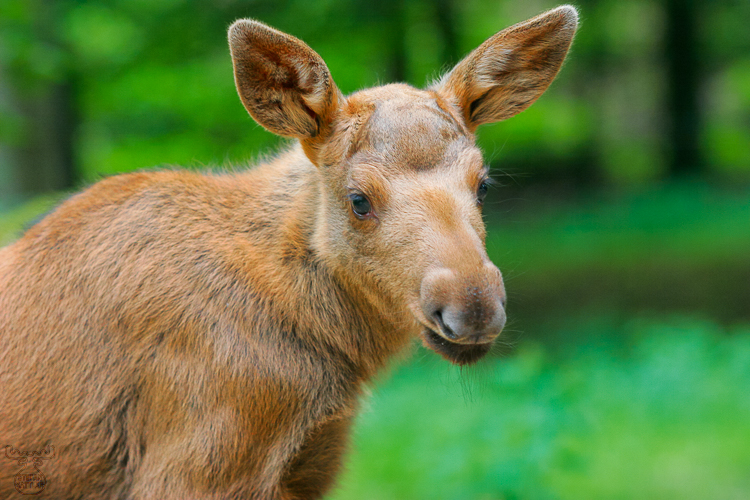 Happy News from my favorite wildlife park in close vicinity - Wildpark Hundshaupten. Lotta and Lars - the moose cow and bull, who joined the park in 2003, have their first offspring !

The calf without name and sex (till now) was born on May 21st and is well accepted by the mother (not a matter of course for moose in vicinity). The picture shows it with an age of 21 days - quite an exciting feeling to watch it growing literally minute by minute.

The colour much more redish compared to an adult moose, the ears already unproportionally large, huge eyes and a muzzle not yet that extensive than his parents, the moose-youngster nearly fits a human baby scheme ;-) One thing is quite similar though: Eating and sleeping are filling up most of his day !

The only looser in the game: Lars, the bull moose! The mother accepts no bull around after giving birth - until the next mating season , just as in nature. Now the pity is, that Lars cannot just search another area for himself and keep distance. He has to share the territorium with mother and calf, which often gets critical in captivity. It seems those three go along with the situation rather proffessional. Anyhow I saw Lotta several times driving off her husband with force when he came too close to the calf. It's like in human life - when the lady has what she wanted, the man should keep off :-))

Now, as the sex of the calf is still open, it's to hope it migth be a female moose. Not that I wouldn't prefer a bull with huge antlers, just for the reason of getting more impressive pictures (sorry, this is not meant anti-feministic, but the antlers !!). But I fear, that a second bull wouldn't work very well in the enclosure and another female could stay in the park ???

Technically seen another digital picture with my new EOS20D, taken at 1/250 with F4.0 from tripod. Exposure was corrected by  -1 1/3 stops at ISO 400 and 130mm (isn't it a pleasure not to estimate facts, but just retrieve them from the EXIF data from the RAW picture ?).

Less pleasure it is to get an Error message from the camera - fairly seldom, but requiring to switch off and on again. A digital life ... but I've heard a SW update from Canon is planned. Lucky it's not Windows as operating system (yet?), or how would we react, when after pressing the trigger the camera would ask "Do you really want to take a picture ?"

Enjoy changing times and take it easy,
your Mr. Mooseman !