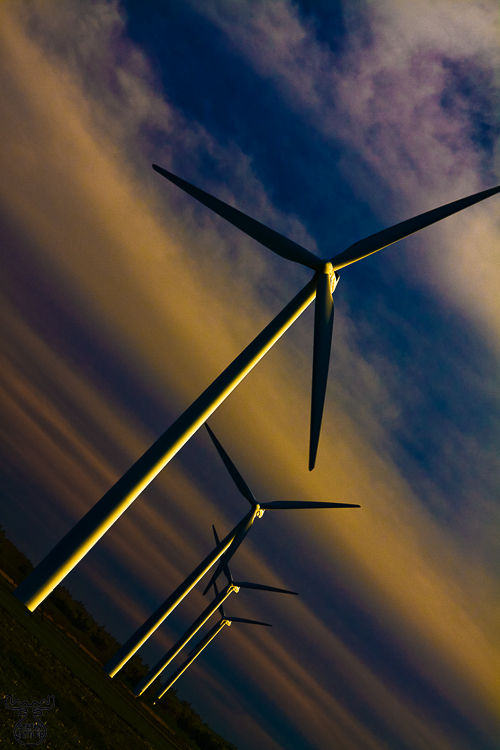 Discussions on natural resources and renewable energy started when I was a small boy - the oil crisis 1973 and 1979. Disasters such as the current nuclear incident in Fukushima brought a continued discussion on renewable energies to a new peak and media interest. Suddenly things happen, which many organizations tried to start for years - especially in respect to nuclear power.

As long as I remember visiting Denmark I remember wind power stations as natural part of the landscapes. Denmark was a pioneer in the 1970s and wind power covers around 20% of the total need in the country today. Half of the wind turbines for the world are produced by Danish manufacturers.

There are some wind power station images in my archives. During a visit together with a friend we decided to get closer into a wind power plant. The road was not more than a small supply route, and passing some farmers with questioning look we entered the arena wind. Impressive constructions, indeed. Our VW Transporter looked like a small toy compared to the tall towers. It somehow felt majestic.

A whispering sound came from high above. I couldn't understand, why such muted noise can disturb residents. Which is actually another discussion, this time against ground based wind power.  Until two of the large power stations suddenly decided to turn of, likely intending to shock me. That kind of noise was so unexpected, that my thoughts on wind power in general turned to a trauma - it took me some seconds to realize that there won't be any blades falling down or the tower tilting. The turbines were stopped by feathering the blades into the wind - creating an enormous noise for some seconds. Wide awake, it took me some minutes to calm down again and continue my thoughts on the use of natural forces. Maybe offshore plants are the better choice :-)