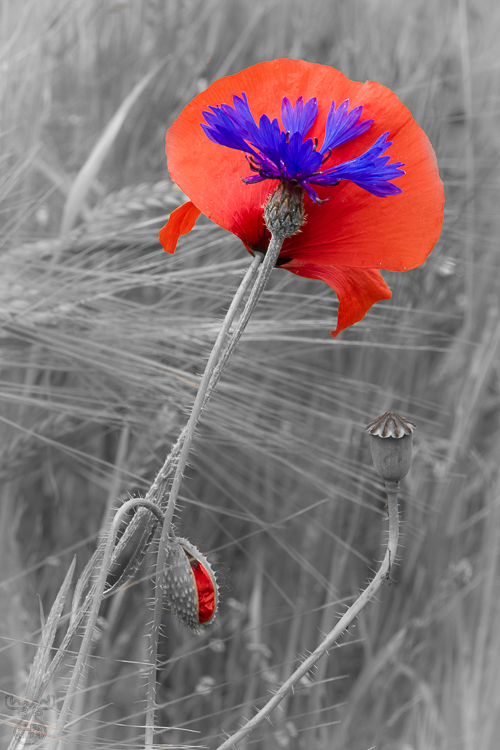 It was on the way back home from an eventful medieval market and festival at Castle Rabenstein in the Franconian Switzerland. It was getting darker already, mainly because of rain coming up in the evening. I was close to stop my ideas about some awesome late-light photos of the wonderful landscape - there would be no final, flat rays of sunshine any more, and I was tired.

At the top of a hill a grain field attracted my interest - not because of the cereals, but the spread spots of blue and red color originating from cornflowers and corn poppies - some of my favorite plants in fact. I enjoy the bright colors as well as the soft structure of the poppies and the spiny appearance of the cornflowes.

One duo came into focus after I had parked car and family close to a farm: A single cornflower and a single corn poppy seemed to hug each other - the stems were twisted together and the blossoms were in touch (even the upcoming wind did not change that situation for longer than a few seconds-they appeared unseparable).

The picture was created - and the dim light finally was perfect for this kind of image. Only the wind resulted in a couple of blurred images, but one was perfect. Some final selective de-saturation of the abundance of greens from the grain helped focussing on the main actors of this love story. I fear, it might have become a drama later on - the first crop likely was harvested shortly after our visit.