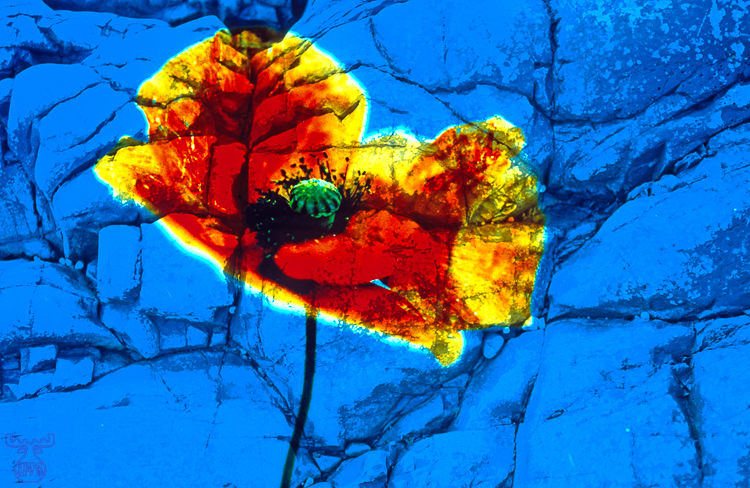 Attentive readers will be fully aware that corn poppies appeared many times before in the web portfolio. Besides Indian paintbrush they are my favorite flowers.

This image is already several years old, 14 years to be precise. I hope it is not because of a lack of newer images, but more to contribute some insight into "ancient" photography techniques maybe not even known to younger, digital image hunters today.

Once upon a time, digital sensors were unknown, displays with histograms just fiction. Cameras used film rolls instead of memory chips, images had to be designed in the viewfinder including the correct exposure and knowledge of the limitations of the slide material. Errors in the image composition were not forgiven by checking the result immediately and just going for the next shot. Those faults were punished weeks after the situation when getting the developped slide film back from the labs after returning from vacation.

BUT - photographers with interest in experiments at all times tried to make something special, something, that developped in their heads and not the camera only, something that just didn't exist in reality. Oh - I forgot - computers and Photoshop were not really available for normal consumers at those black times.

Creativity was maybe hindered (also for me some ideas were impossible to realize at those times without own photo lab), but there were enough opportunities, one of many was the combination of two or more slides into one slide frame - a slide sandwich. This image is a mixture of a corrn poppy with blue sky background and a rock assembly in black and white slide film. Both images had to be slightly overexposed in order to get a correctly exposed, combined slide image.

So also here the image had to be planned in advance to achieve acceptably results. I can just encourage you to (still) follow this stroke of genius in photography despite all technical possibilities of todays gear: First think and feel what you want to depict or express, then adjust your camera settings accordingly and finally use the trigger ...