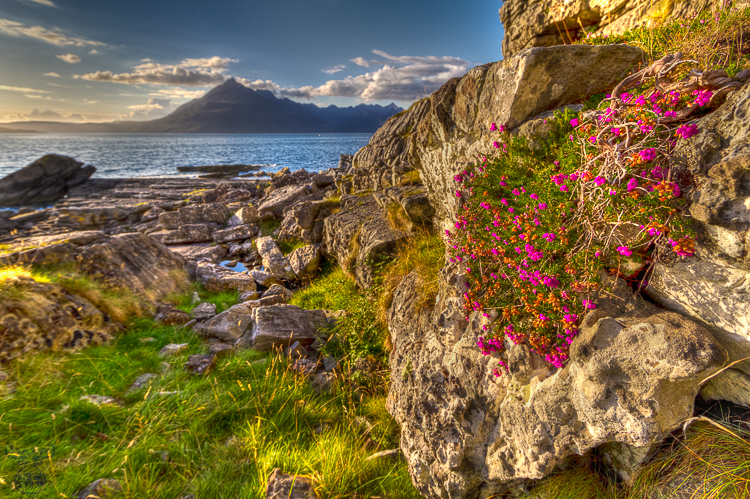 It is in fact in the middle of nowhere. Elgol (Ealaghol in Gaelic) is a small fishertown on the Isle of Skye in Scotland, giving home to about 150 inhabitants only.

Back in 1994 during our initial Scotland trip we visited Elgol the first time. A scenic drive over the island towards the end of the Strathaird peninsula brought us finally down to the harbor area of Elgol. We decided to park our car. I remember this was my old Seat, where we had taken out the backseat and build a foldable wooden board, which we used - adding some layers of thermal mat - as bed. A very native (rather primitive) form of camper.

Walking from the harbor along the beach, passing around a corner of the cliffs we suddenly found a typical Scottish stone house with two chimneys - one on each side. A large tree was in front of it, featuring a child's swing hanging from one of it's large branches. Everything was rather shabby and lapsed, but we lost out heart seeing this idyllic scenery standing alone in front of the cliffs in a separated bay. We decided, that we would have to buy it later on, if we might came back again - maybe accessing a larger budget at that time and being able to purchase and restore the house (and the child's swing)

It was one of the most lasting memories from that trip. Actually we came back for two more visits - just realizing somebody already had taken our part of renovating the house. We don't know if for living or just as holiday cottage. Bad luck anyhow (well, we likely wouldn't have had the budget either, and what would you finally do with a house in the middle of nowhere, thousand of kilometres from home (maybe besides getting it a new home or a place of retreat for relaxing and enjoying ...)?

Well, that's how life goes. The memories remain, and we will likely come back for more visits of "our" Elgol home. If not for the house, then for the absolutely stunning sea- and landscapes in the area with amazing rock sceneries at the coast and the hills behind the sea in the background.