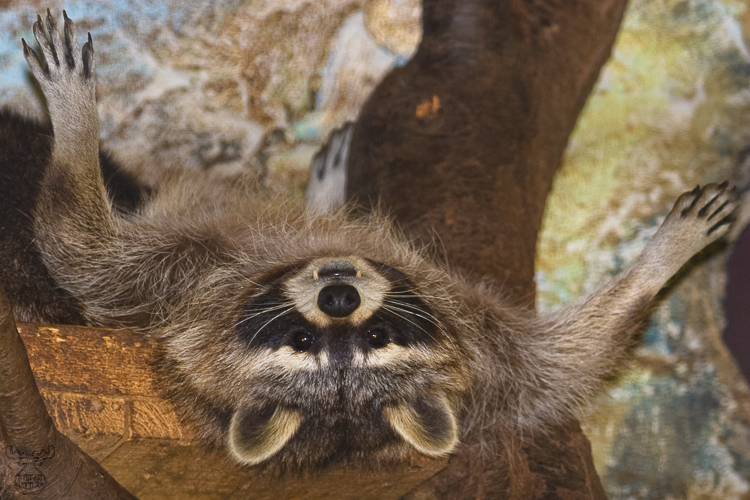 I like these funny looking little cheeky monkies. My first wildlife contact in Canada introduced them as nosy, agile and hoggish tots. While once trying to photograph a kingfisher, one of them had sneaked up to me - approaching to just a few centimeters behind my back. I realized he was after some biscuits in my backpack. After an intense eye contact he vanished within a glance (but stayed close to check out my food sources).

Totally different the examples in Hundshaupten - lazy and tired racoons lying on their trees - at least while I was in their vicinity (I heard from other visitors they sometimes moved). I was assured that they are real and living beasts and can move. So I was sure - they boycott any struggle to take appealing pictures of them. Or just images taken by me personally.

A glory day, the 21st of May 2009 in the afternoon - one of the racoons opened his eyes after an extended nap (of likely 3 days or so). He was lying on his back (the picture is not turned over) and directly faced my lens. I had the flash mounted, the right lens and focal length and even batteries and flash card functioning -  and an image I will never forget after years of waiting. I believe the racoon was even more astonished than I could every be. Or maybe he just opened his eyes to say: "I surrender - I can't stand you any longer waiting  here for the coming years. Take your shoot and be happy". I am :-) - no idea how my little friend sees it.

Or doesn't see it - he closed his eyes again - likely completely exhausted - after a few pictures.