Picture of the month - September 2002 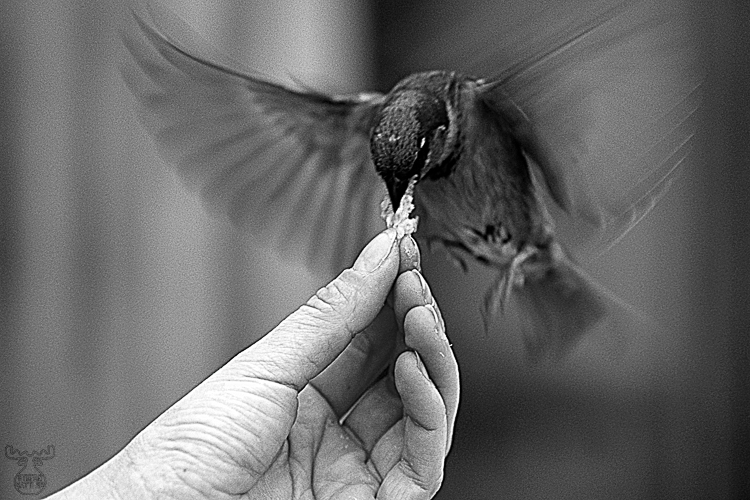 The Sparrow is the bird of the year 2002. Surprisingly for me, when I first time heard this, as such a common companion in the daily citylife doesn't seem like something special. Obviously it is more rare than believed these days....

This special example of the Passer domesticus was very much used to humans. We met this cheeky little bird in the zoo in Hannover. Not in a cage, but on our table in the outdoor restaurant, a type of beergarden.

While enjoying coffee and cake the pal showed interest in the crumbs from our cakes. When he even started landing on our table to increase his chance of getting off something - speculating that it would be more than just our left-overs.

Well done, our little friend had obviously scanned my wife's animal welfarist vibrations (actually she cares for any lifeform even before it would really require it). Fortunately I was at least accepted to take a series of pictures, when she was feeding the sparrow with half a griddle of cake directly from her hand.

And one of the pictures had exactly the right balance between sharpness of the bird and blurring of the wings caused by its motion while staying in the air to grasp as many crumbs as possible.

The slide was originally shot on Kodakchrome Extra Colour (EBX100). For the motif black and white "felt" better, so I scanned the slide with my Nikon LS40ED filmscanner, converted it to B/W in the PC and ordered a slide exposure from file.

From the technical point of view a Canon EOS3 with PB-E2 Booster (which was very useful for the series) and the Canon EF100/2,8 Makro was used - without tripod, so I could follow the birds movements faster. To freeze its speed a short exposure time was anyhow mandatory, which was easy due to the full sunshine on that day.