Picture of the month - September 2003 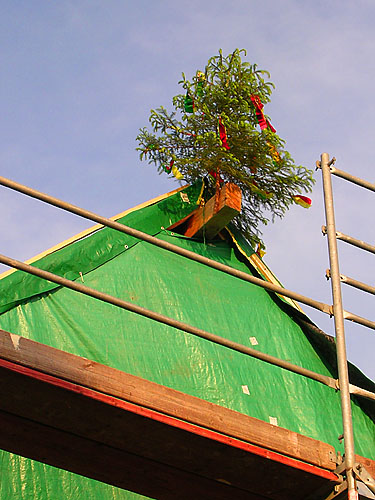 Now - after three months of laziness - Mr.Mooseman comes back with such a stupid picture ?

I can't tell you how many drops of sweat, how many restless days and nights and how many tons of building rubble have passed by until this picture could be taken. It's sounds fancy - let's rebuild our house to get some more space (and probably there will even drop off a small studio for my photography ???). We didn't believe family, friends, colleagues or anyone when they told us how much can go wrong (and always goes wrong).

We didn't dread costs, effort, move house and privations (for a timeframe we believed at the starting time -beginning of the year- would be over in July already). We are still doing so, nothing came as it should, costs are still rising, sweat still running and we are still not moved back to our house. But there is light at the end of the tunnel - hopefully it's not just the headlights of a coming train :-)

I will be back - promised - but it will still takes quite some work and time. When it's done I will update my web three floors higher up hopefully - in my small realm and studio.