Picture of the month - September 2006 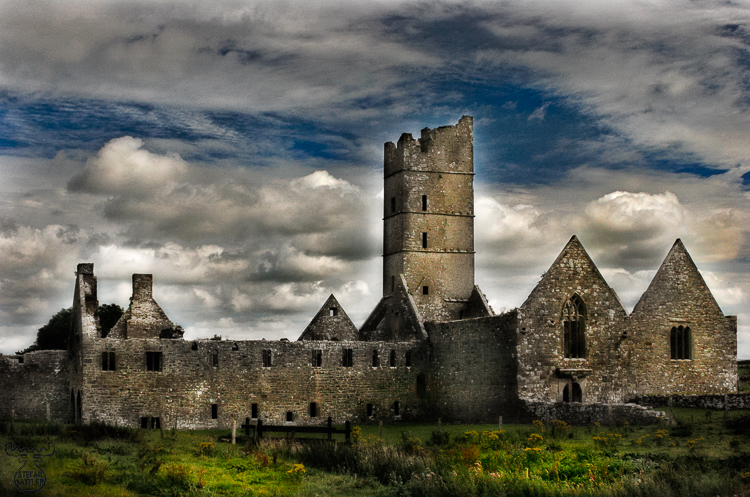 Ireland, a picturesque landscape - with at least as impressive remains from ancient times deserving a picture - or many. What better base for "Ireland in Art", a portfolio from Irish pictures made during the 2005 trip, which I felt being worth some controlled manipulation to increase the impression of a painting and strengthen the message.

Moyne Abbey in County Mayo is such a motif of dusky reflectiveness on ancient times. A former Franciscan friary - now a de-roofed collection of walls inviting for a pondering walk through the dark isles, the few intact stairways and abandoned rooms.

The way to Moyne Abbey was apparently risky - a sign warning of a wild bull had to be passed. Moyne Abbey does defintely not fit the appearance of a typical touristic sight found in many areas. No huge parking spot with extensive sign posts everywhere. No perfectly asphaltic road to reach it. No warden, no entrance fee, no information brochures, no multimedia presentation. It was phantastic - just wandering around the ruin - alone by the way - letting your imagination dive down into those times when still people inhabited the friary, the roofs intact, smoke from the kitchen rising from the chimney, the cloister used for meditation and prayer.

I am fascinated by sights like this, and even more as it's one not being touritically formatted. My wife can tell how long I can stay and walk around in this kind of location - from Ireland and other similar locations before.

The picture itself was a guidebook-shot or souvenir picture (OK, a better one maybe, at least with 8,2 MPixel). The cloudy and drizzly ambience did his job, and the final manipulation - a selective contrast increase and saturation decrease (selective as it was only applied partially in some areas of the picture using layer masks) finalized a picture as I wanted to see it - not as it really was. It is not a document of reality (although nothing is really changed, removed or added), but a image created the way I saw (felt?) it. Just "Ireland in Art" ...