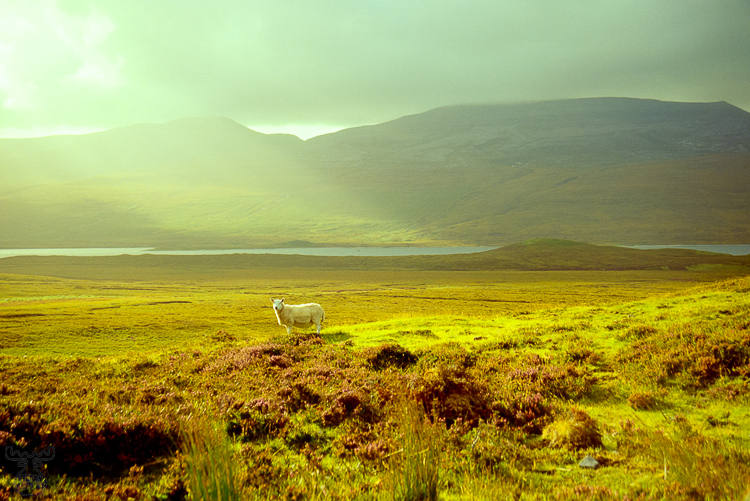 This is the first picture I ever sent in to a photo competition. And it was accepted, which gave me a type of boost for getting even more crazy for photographing. It was after a long time of taking pictures a confirmation, that not everything I capture on film is only fine for me.

Additionally this picture showing a sheep in the heather- and grass-covered Scottish Highlands is "THE" picture I see in front of my eyes, when I talk about Scotland.

After a heavy rain the first ray of light came again through the clouds spotting the lonesome sheep, which seems to look at me saying "Thanks god, rain is over".

A typical picture of the type "What a luck to be at the right time at the right place" (and had my camera with me, one has to add ...).

The shot was taken in September 1994 on our first Scotland trip on Kodak slide film with my first own SLR: A Canon EOS600 and my first lens: a EF 3,5-4,5/35-105. Due to the urgency of the situation - the light situation changed rapidly - no tripod was used. I stopped the car at the side of a single track road being typical for the lonesome Highlands, and took just one picture which was good enough in the end - this one.

Looking at this picture will likely force me again and again into that country of landscapes, wilderness, whisky, rain and sunshine. Last two sound like a contradiction? No - it never rains for a long period, sun always comes back again after a short, wet intermezzo. Weather is a little bit like life - ups and downs hunt each other ...

I hope, you also have such "boosters", which keep you going looking for the next shot with memory-effect ....