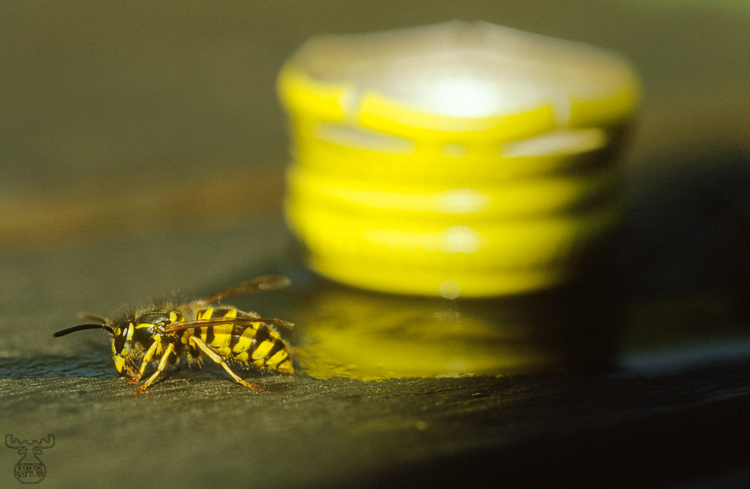 One of summer's less wanted features - wasps are common irritations wherever one likes to eat and drink outside. So for Barbara and me - having a break after a photographing session in a nearby wildlife park. It was nearly impossible to have our apple lemonade without 1, 2 or more wasps circling around us. So they became victims - of half a roll of film ... (the appropriate way for a friend of nature)

The cap of the lemonade bottle in bright yellow, just as the stripes on the wasp - a colour relation by coincidence, enhanced by the late afternoon light. A pure attraction - pretty inevitable temptation - to the photographers eye. Without any tripod, but just the hand supporting, it's not easy to take a macro picture, especially as our little friend in the picture had many friends. Interesting to see - for getting some of the sweet stuff they started fighting (although enough lemonade had dropped onto the table). Interesting to see, hard to focus ...

Only one of the slides finally turned out to be sharp - you currently see it. It again shows it is wrong to save on film material. For the technically interested: I used a EOS 3 with the EF 100/2,8 Macro lens. For such motifs I always use hand focusing instead of autofocus, which usually tends to run throught he whole (even if partly limited) focus range. If you want to get a sharp picture, it's often impossible to close the aperture for a large depth of field - in this case a good thing in order to concentrate the look onto the wasp, while the cap vanishes in blur.

Find the interesting in the common,
your Mr. Mooseman !