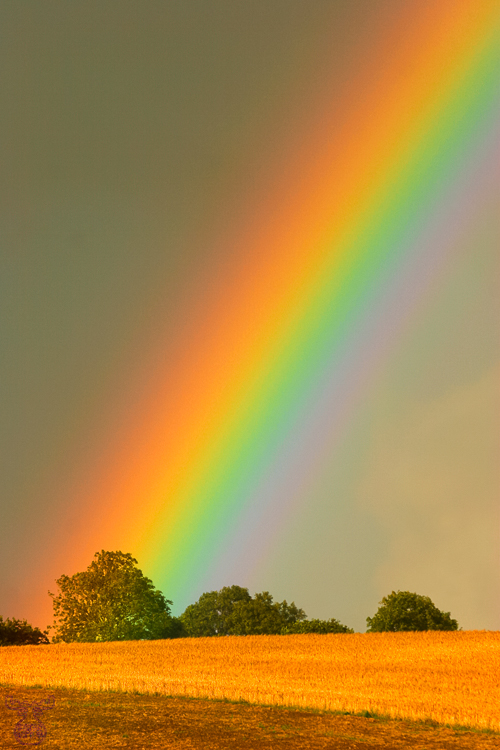 Many different myths have developped around the colourful rainbow. One of them, which I remember from my boyhood, is the pot of gold, which can be found at the ends of the rainbow.

We didn't find gold, when we visited Ireland this year. But the rainbow itself, one of three we saw during our holiday roundtrip travelling the coast of Ireland, was so bright and intensive in colour, that it was award enough.

The whole story occured after a heavy, but very short rain shower, which had driven us out of the cemetary of the monastery. We ran back to the car-park to prevent our gear getting (too) wet. Just a minute after entering the car, we saw the rainbow just in front of us. After some exiting glances and cleaning the frontglass of my lens from raindrops, I took these pictures showing this rainbow in a luminance I never had seen any before. Some more shots followed after running back to the Monastery to catch the rainbow between the crosses, which made Monasterboice so famous - but there the light vanished already.

It's a moment of adrenaline you don't want to miss and - a photographer's fortune - must keep on film, sorry, flashcard.


So far for now: Digital photography is as much fun, but more laborious than analog one. It's nice to have histograms and direct check after taking the pictures, but the evenings after a long day get busy now: Downloading the crop of the day to the notebook, maybe some first sorting, and then - you don't want to loose anything - a backup on CD. It takes quite a while compared to just throwing the film rolls into some storage box ... saving some time later on at home on the other hand.