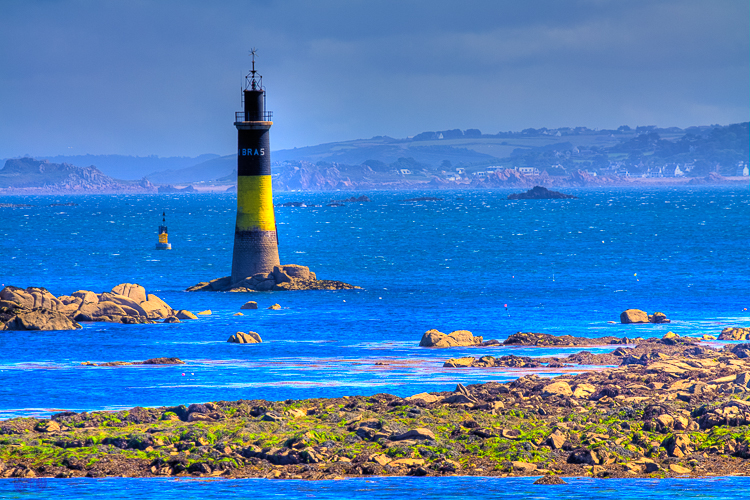 This image launches a new regional section on my website: Brittany, Bretagne (French) or Breizh (Breton). Not all pictures are sorted and archived yet from this years vacation on the Northern coast affiliated to the English channel. Anyhow I want to share some of the first ones being ready - and it is promised, that subsequently more images and some panoramas will be added. A travel diary (in German only) is started as well.

Brittany is dominated by exceptional coastlines. Lighthouses are naturally coming with it, the number is anyhow amazing. That is just what I was waiting for - lighthouses, rough and rocky coastlines such as the famous Côte Granite Rose and a cozy traditional summer cottage built of stone - some steps from the sea. And in close vicinity towns such as Roscoff (Enez Vaz in Breton), where this picture was taken.

Roscoff's ferry port is renowned for linking Brittany to Great Britain and Ireland, as well as to the nearby island of Île de Batz. A huge jetty bridges the sea during low tide, so the passengers can reach the ferry to the island - the tidal range can be more than 10 meters in the Bretagne.

And Roscoff owns three lighthouses - one large stone version situated directly in the town, and two tiny ones with bright yellow and black color in the sea. On of them standing like a sentinel in front of the harbor is Men-Guen-Bras, depicted here from the jetty with HDR technique. A wonder the picture is not blurry, as the wind on the jetty was strong. Lucky us, that we didn't plan to go for the Île de Batz this day.