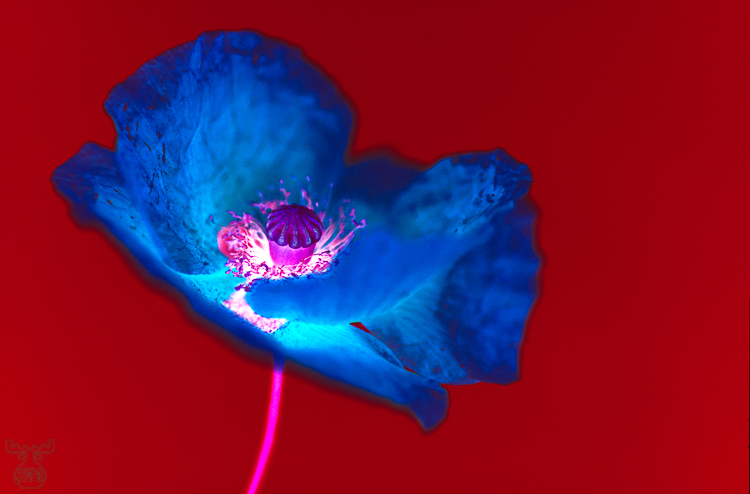 This corn poppy, photographed in 1998, is one of my "experiments". The picture was taken at the edge of a large wheat field, where some of these flowers, which count to my favorite species, were spread between the cereals. After I believed long time, that corn poppy, which I enjoyed looking at when I was a child already, would die out, it became more frequent again the recent years. maybe it is sown by intention ?

A blue cardboard was used as background to screen out the wheat, which would have disturbed the picture quite heavily. With the Canon EOS50E with the EF 100/2,8 Macro mounted on a tripod I took some shots on Kodak Elite II (100) slide film with a manual exposure setting of +2: The reason was, that I wanted to get the film cross developped and I played around with different exposure settings these days.

Besides the really cross-developped pictures I received after developping the film in this unusual way, I also checked the "negatives" directly - and immediately loved the colour mixed up picture as you see it on this page. Additionally to the inverse colours the contrast is increased by the cross development, and at the border between background and flower you can see a shadow like area. The colours themselves - dark red and a very contrasting blue of the flower are fitting to the graphic loving person you might sense looking at more of my pictures.

It is the type of photography my wife doesn't like so much: Why should one manipulate around, if the picture itself (or nature itself) is art enough? True, but getting one step further from pure displaying the reality and nature to changing the picture in a way, that another "reality" arises has a charm on its own .... and all that without computer ...
Not meaning, that photography withoput "tricks" is not art. Both have their right to exist

Good light and a not too stormy November !