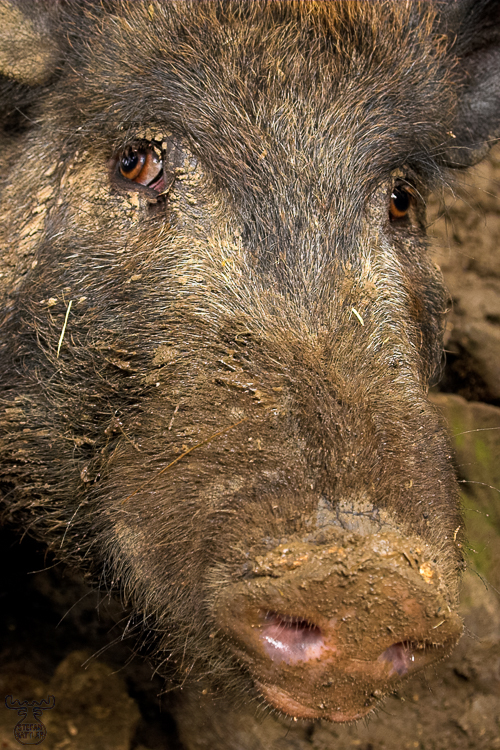 A crazy pig, but by far not as crazy as the guy kneeing in front of him on a muddy path, holding a camera in his hands and approaching the moist nose with the front-lens getting closer and closer. Being a wholehearted friend of photography a certain level of crazyness helps anyway.

Not any kind of mad cow disease caught this Albrecht-Dürer-Pig in Hundshaupten's wildpark. Curiosity and to a certain extent the unorthodox photographing angle was the reason for this impression. And maybe the exact right point in time to push the trigger - at the time the interest in my person vanished slightly due to the approach of new guests possibly bringing goodies - one eye immediately focused this possibility. Goodies instead of fame - which other pig can tell being portrayed and ending up on a "picture of the month" page instead of a plate ? :-))

No wildlife or even serious nature photography, but as much fun - and sometimes as laborious - wild boars can be fast. On the other side this specific specimen brought a different problem - it was so curious, that the closest distance my lens could stand was too often underrun ... so contrary to wildlife photography this time I had to use the other end of my lens range ...