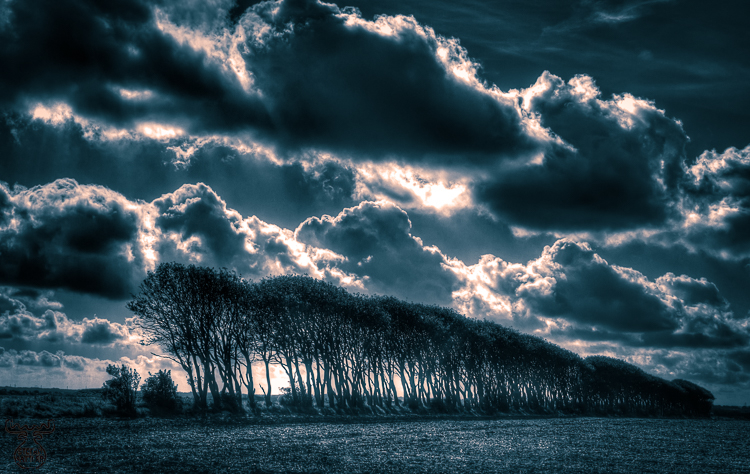 
In Norse mythology Ragnarök (Fate of the Gods) is drawing a dark picture of the apocalypse. Thor, Freyja and all the other gods die in a series of natural disasters and a great battle followed by the submersion of the world in water.

Contrary to this impression, our vacation in Denmark was awesome and characterized by sunshine and recreation (which includes photography :-)
The row of trees is a motif I had seen several times in the years before - and either time or weather conditions prevented me from taking images. Another example, that persistence and numerous attempts are essential in photography.

While usually visitors tend to hurry to the Western coastline of Denmark and get as close to the North Sea and it's beautiful dune and sea landscape as possible, it pays off looking for the beauty inside the country (here barely 20 kilometers off the beaten paths were enough!). As Denmark is a very flat country, open and widelandscapes are frequent. Hence "Obstacles" or objects appear prominent and are virtually masked out from the enviroment.

Even weather was fine when taking the image, it seems Northern countries have something in common: Providing picturesque clouds all day long. To change the sunny vacation-image to the "end of the world" mood, HDR imaging and selective color reduction was necessary - it is not that easy to overcome the "postcard" image in Denmark.