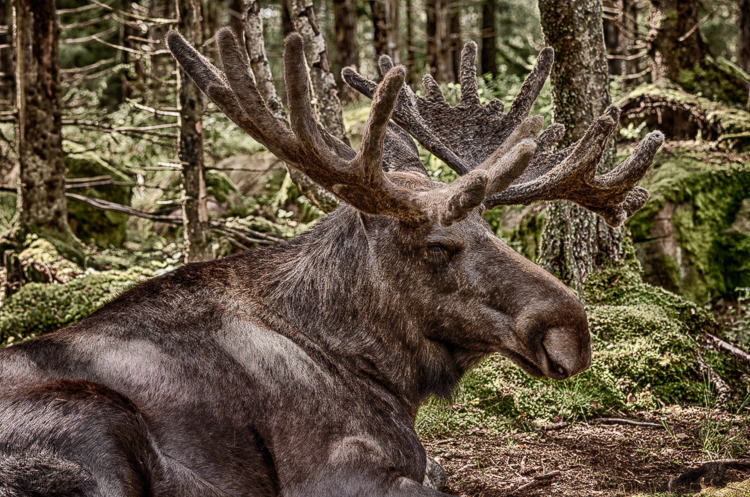 Here it comes - the first example of this year's vacational yield of images emerging from two weeks in Sweden.

What else would you expect than a moose? And yes - we again also found real wildlife moose - in fact not a matter of course just by travelling the country inhabited by around 350.000 moose in total, but luck.

This bull moose here is not wildlife - it's a captive one from one of the many moose parks available nowadays to the countries visitors. However it is a park I can recommend - Smålandet älgpark in Markaryd.

The difference to many others is, that it is a safari style park. You can either travel it with one of the train tours offered or - my preference - use your own car and circle the track one or several times.

You can stop and point your lens out of the car window when one of the mighty animals is close enough to be observed or photographed. This image is taken with a focal length of just 70mm.

However the track is in many parts not wide enough for two cars, so you feel obliged after a while to leave the spot for the next car in the back. But you may just go for another loop!

One of the good things regarding moose photography, which makes it especially in captive conditions a worthwhile motif also for beginners: Moose are really lazy creatures and - when finally found - pose willingly in front of your camera.