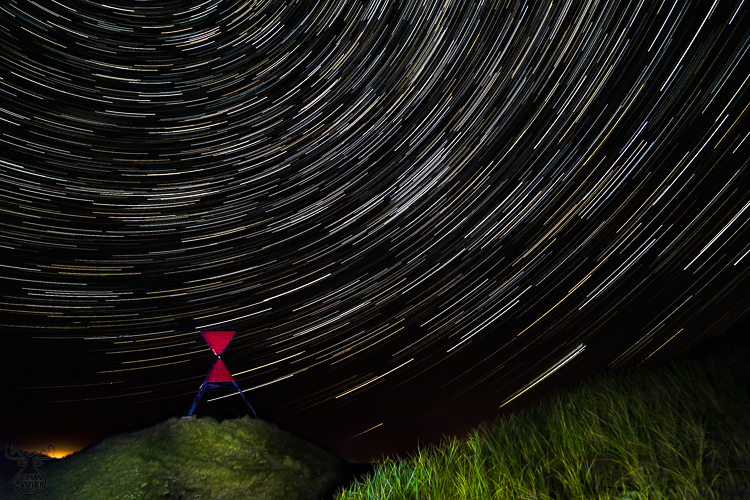 Yes, it can be hard - especially during your spare time or vacation - to get up early or stay up late - how pleasant it can be to relax on the sofa instead or take a longer sleep.

Maybe this is one of the special characteristics of fanatic people, photographers particularly, to break the coziness and get out for taking THE picture they have in mind. Unintelligibale for many, indeed.

I took pictures of the Hubsy Klit Båke (Husby dune beacon) in the image several times during daytime. But I always imagined a night shot.

With strong flashlights (I used the LedLenser X21R here) it is just a trifle to light up the dark beacon and the marram grass of the surrounding dunes.

Instead of taking a long exposure, which would have overexposed the backlight from settlements in the background, I took a long series of 20s long single exposures. After some adjustments in Lightroom all were combined in a free software called StarTrails.

Finally the long term exposure with the lightpainting of dunes and beacon were superimposed in Photoshop - the image made in my mind initially showed up on the screen. It was worth staying up and climbing dunes in the dark (almost stumbling over roots).

One well meant advice: For this kind of night adventures a headlight with both normal white light () as well a red light () is perfect.

The white light for finding your way to the location avoid stumbling as myself. The red light for checking the camera settings preventing blinding your eyes.