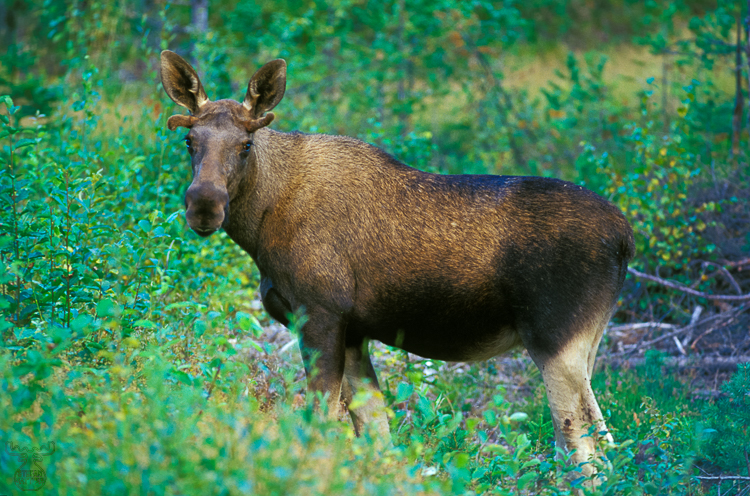 This is the premiere moose - the first one posing for more than 150 milliseconds in a fair distance, with loaded film, a 300mm tele plus 1,4 converter attached and acceptable late afternoon light.

He was baptized "Muffel", a special name for animals snouts in German which just fits for those phantastic, though little stupid looking, animals.  The encounter happened to be in our Sweden vacation 2002, more exactly August the 16th at around 19.20 close to Linsell/Hðrjedalen! The day will be marked personal holiday in my calendar from now on.

It was at a point when I started to get sceptic again, if we would find any moose in a way photos might emerge from - in Canada I didn't have that luck, and Sweden seemed to be very similar in that perspective.

It was one of the many lets-look-for-a-moose-late-in-the-evening-tours quite far away from any civilisation.
Our VW T4 Bus "Multivan" had quite a hard time these days, as "streets" far out happened to be gravel roads with potholes in the size of a whole tire at least. It didn't show any signs of fatigue luckily. And it is the best car for moose photography, which turned out as you will see later.

We had spotted the young moose bull (you can see rudimentary antlers already, likely a one-year old one) from quite some distance on the road - in the last sunbeams creaping through the trees he was feeding on the young twigs on the roadside. First we believed he would just start through and gone he was. Far from it ! But for safety from here the first roll of film was sacrificed - just for the record!

Then we very slowly drove closer - "Muffel" looked sceptically and changed roadside - to the darker side without sun of course! But he didn't run away! With 300mm (enabled image stabilizer) and 1,4x converter good pictures were possible! Yes! YES! Finally my domains name become type of opening ceremony ! Mr. Mooseman was born !

We anyhow didn't intend to leave the car at any point. Mainly because moose usually react very fast on persons and fade away, while cars do not impress them so much. Intelligent and well learnt - cars don't shoot !

On the other side - although not being during mating season - some respect for moose is advisable, they are amazingly huge and can get furious and dangerous, even if looking like something to cuddle and showing a high potential of timidity. Luckily I am equipped in the meantime with a level of photo stuff, that threatens the health of my back when carrying the backpack, but allowing some distance shots also treating the animals with care.

Around 20 minutes we could study "Muffel" - he was little bit wandering around to eliminate vast masses of leaf from young trees - the lushy, fresh ones you know. But he stayed around the car, sometimes rotating his ears when he heard some noise from our side, with an expression of fear and attention. That noise was usually created by me trying to find out, how to get the best angle for photographing.
Our car had best opportunities to try that out: Either of the front windows depending on the side our moose was at the point in time, or the sliding window in the back. Usually I used the window to stabilise the camera, shutter speeds were very slow due to the vanishing sunlight.
In the back of the car you can even place a tripod and open the sliding back door without problems - a dry, stable and mobile camouflage!

Well, enough for this time! Good light and go on looking for the moose !