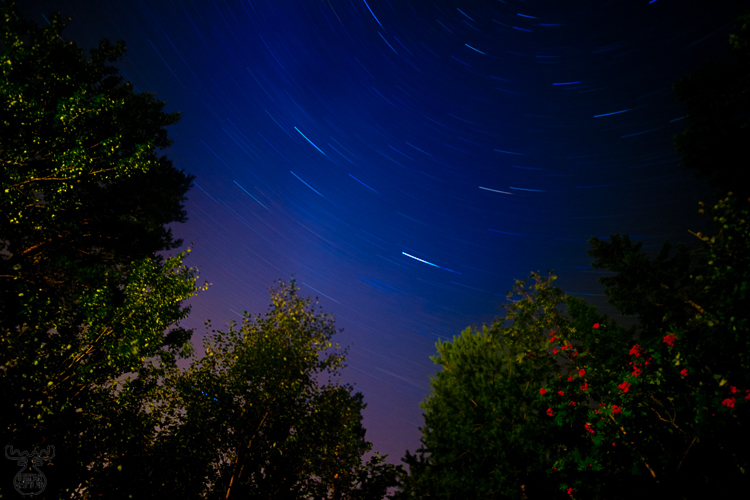 Trying these kind of long-time exposures requires an environment with an absence of two types of pollution: air pollution and light pollution (and - speaking for itself - a cloudless sky). Therefore a city environment doesn't really give the best results - lots of artificial light sources and often a hazy sky reflecting these city lights. Some of it might be nice and adding additional colors, too much destroys the clear view of the stars.

In the low-population country Sweden the prerequisites can be found commonly. So setting up the camera on a stable tripod, finding a spot with a framework - in this case several trees and using the remote control on the camera to enable bulb releases was all I had to do. Exposure time though is more trial and error (sometimes experience helps, too). This image took about 46 minutes at F3.5.

The most astonishing experience when taking these pictures with the long-time exposure noise reduction feature of the Camera (in this case a Canon EOS50D) was actually, that the camera's internal calculation time after the image had been taken took the same time again - 45 minutes. Taking the computing power of modern camera ASICs (the Digic-IV) in this case) into account, I don't believe it's used for calculation during the whole period. Hotpixels might be reduced by taking a black image before of after the actual image to find those annoying pixels and just computationally eliminate those. Why the black frame would require an "exposure" of the same time - I have no idea up to now.

Try it yourself - if fact I believe you can take the pictures as well without the time-consuming feature and better take one more shot before it starts raining (which in fact is neither good for the pictures nor for your gear, so stay awake). Some noise reduction on the final image afterwards gives comparable results.