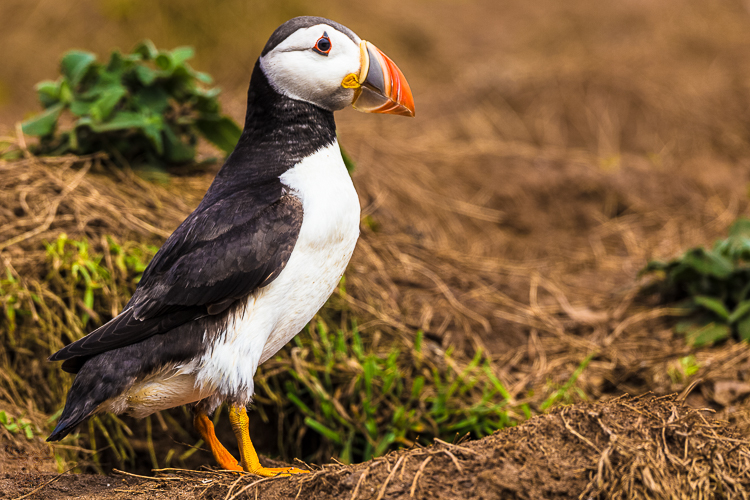 A quest of centuries. This might be an appropriate title for the rather unspectacular image above taking into account, that puffins are an object of my desires for a pretty long time - actually since I had seen first images of these cute birds.

While being an object of desire, taking images of the latter was the real idea. Yes, I can still enjoy nature also without camera. I think.

Now puffins have the characteristic to stay on islands and costal areas only a part of the year - during the breeding season mature puffins return to their colony starting in late spring. They will leave again to the outer sea when their chicks have fully fledged. This is slightly depending on the location, but usually is around July timeframe.

Here comes the problem: Bavarian vacation time usually starts when puffins tend to leave the land. As my flight capabilities are rather limited I have actually always missed them when we had the chance to pass by an area where colonies are located. Wales should change the game - Investigations about Skomer Islands indicated, that a certain bunch of puffins usually are left beginning of August. We planned our trip to start directly after the last hour of school time.

The car had been prepared the days before as our luggage was. The camera was ready for shooting, batteries charged, memory card emptied and ready for hundreds of puffin images. The ferry was booked, and after more than 1400km in the care - interrupted by the ferry trip from Calais to Dover -we reached our small cottage carefully selected in close vicinity of Skomer Island.

The first day after arrival the trip had affected me so much that I decided to stay home to recover. The next day no boats departed to Skomer Island - "Closed on Mondays". The Skomer webcam showed still a reasonable amount of puffins. I couldn't wait to finally approach my objects of desire "live". The next day we departed early and reached Lockley Lodge, where tickets are sold for the boat transfers. "No trips today", "Too heavy sea, too strong winds". The planned day trip ended faster than expected. "Tomorrow it looks better, check out in Twitter".

One day later, early at Lockley Lodge again - the first visitor obviously - the weather had cleared and winds dropped to a reasonable level (still my stomach expressed concerns regarding the imminent boat trip). Yes! Just one more hour, a short boat trip and no puffin on Skomer Island would be safe from my camera. Off the boat on the island (stomach still signalled "OK"), up the hills and starting the hike to the Southern parts of the islands where puffins are supposed to be frequent.

Just a few hundred meters - and there it was: My first puffin in person, live, real and as beautiful as I had in mind from so many images seen before. 600mm focal length were just enough for a full frame image of Fratercula arctica - the Atlantic puffin. I observed this wonder of nature for a while, took a few images and went on to the colonies.

It was a wonderful day on Skomer Island. And it was the only puffin I had seen at the end of the day (except some examples out at sea when we took our boat back to the mainland). I shouldn't have postponed the trip in order to recover from the trip. But - I have my encounter with a real puffin. Friendship forever. No regrets.