So far, we visited these areas and cities in Italy: 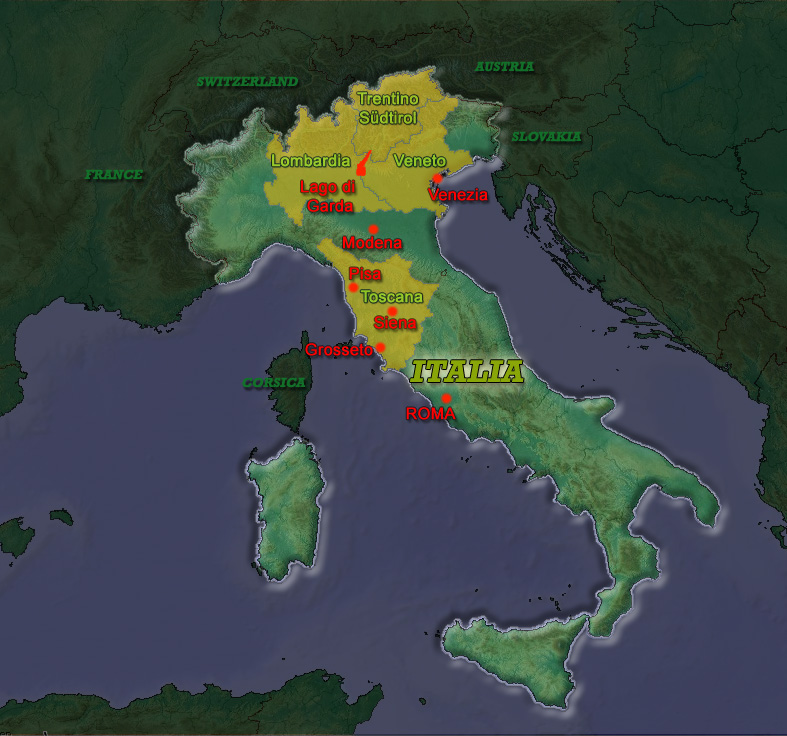 Rome (Roma), the capital of Italy with a vast amount of historical  highlights
Rome belongs to the cities with most flair worldwide (my statement), it's always worth a visit, and you spend hours looking at historic sites, or just sit down at one of the many fountains with a piece of pizza in your hands just bought from one of the close street sales.

Venice (Venezia), the capital of Italy's region Veneto, is lying in the Venetian lagoon and for sure a "City of Water" or "City of Bridges" as often referenced.  It is considered one of the most beautiful cities in the world and is inscribed in the UNESCO World Heritage List.  Lovers enjoy the water gondolas, where unfortunately prices are high and the known song costs extra. However - narrow alleys, historic buildings, lot's of waterways, bridges and known highlights such as Europe's largest urban car free area, the Grand Canal, St Mark's Square, Doge's Palace, Rialto Bridge and the Bridge of Sighs are more than worth a visit . Avoid August if possible as it's simply too crowded, and don't drink or eat at extremly touristic places such as St. Mark's square if you are are no millionaire ...

South Tyrol (Südtirol, Trentino, Alto Adige), a natural environment with mountain hiking and wonderful food. It's quite German, nearly all people also speak German there, and you have to try the wonderful food such as Südtirol bacon or Williams pear snaps.

Tuscany (Toskana, Toscana), an awesome Italian experience with world-wide reputation for it's rolling hills, historic sites and cozy villages (besides wine, olive oil and Pecorino cheese). Some well known locations are the Isle of Elba, Pisa, Volterra, Florence, Siena, San Gimignano and the Chianti region. It is worthwhile to visit the original small cottages with ancient ambiance, many are built on the tops of the hills (such as Roccatederighi, where we resided during our 2014 trip). Lovers of bathing will find their share at the various coastlines - ranging from rocky sections, where you have to climb down to reach the waterline, to sandy beaches with carribean ambiance. More the nature friend? Many natural parks invite for walks and experience- both inland as well as on the coastlines. One example is the Sterpaia coastal reserve between Piombino and Follonica: A humid forest as remains for the ancient coast of the Maremma. Italian feeling with attractions for any interest.

Our latest trip to lake Garda was in June 2014 - ways less crowded than in August, but still extremely hot. The one before - during August 2008 - showed up less fortunate as flooded with tourists, the road around the sea crowded and stop-and-go common feature. In any case the special atmosphere of Lago di Garda trapped us and brought us an enjoyable time once more.