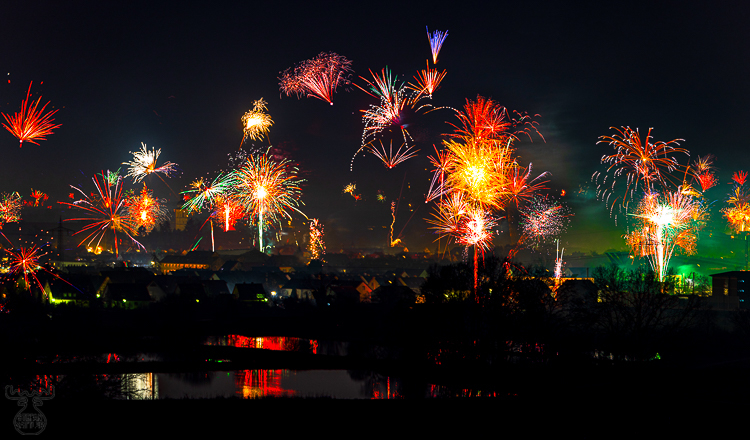 Happy New Year everyone! Let's start 2023 with best intentions - above all to take a bag full of good images :-)

Well, the last year ended great in that respect - instead of party I took the chance to walk to a hill not far from my hometown Forchheim to enjoy a magnificient view over the city.

Of course starting well before midnight and waiting until the amount of fireworks dropped significantly at around 25 minutes past 12.

The weather was inviting - felt almost like spring with temperatures above 10°C, it was dry without clouds or mist - so the view was unobstructed.

Between the cityscape and the hill some ponds added awesome reflections of the firework to the image and extended the image effective height of the final pictures.

While I changed quite many images to panorama aspect ratios due the lack of structure in the sky (without this negative space adding anything to the image impression) this one just got some minor cropping on the upper sky.

This image was actually one of the last ones taken at about 20 minutes past 12. And it is not one shot, but a composition of 5 single images taken - the fireworks already had declined essentially, so I had to combine a few pictures to get this well filled sky composition.