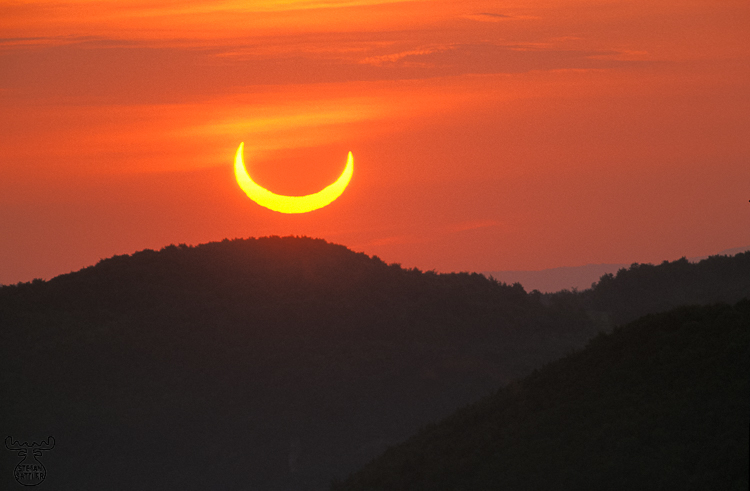 This motif is burning hot - both in temperature as well as in timing - it was taken May 31st.  The spectacular event of an eclipse of the sun - even if only penumbral - doesn't show up too often. This time it was perfectly scheduled on a Saturday, so no problem to take the time to bann it on film. Additionally I was in the lucky situation of being in a part of Germany no covered with clouds ...

OK, standing up at 4.20 in the morning is not everyones favorite. But in summertime it isn't that bad, it's warm - not too hot yet - and birds are out already whistling, nearly romantic as the hectic of the day hasn't started yet.
It took only 15 minutes to come to the viewpoint I had chosen the day before -  in order to have a good view direction East where sun emerges. It was a mountain called "Feuerstein" in the neighbour town Ebermannstadt.

Already some 15 people had gathered on this point when I arrived at ten past 5, but  I went a little bit down the hill, where no disturbing green was in the view. Only 7 minutes to go ! At 5.17 then sunrise was calculated and the eclipse should be visible until 6.27. So tripod up, camera with 300mm lens and 2x converter mounted. The special foil purchased for sun viewing (Baader) was not necessary in the very beginning, but later, when the sun is coming over the horizon - never forget to use one - both in order to protect your equipment and the health of your eyes !!!

Very important - because of the long tele - is to use the mirror lock and the remote switch, so the camera doesn't shake when pressing the trigger ... I also used bracketing (in the range of +/- 2) in order to have at least a picture with right exposure. This one was taken with +1.5 stops, which was good in order to still see some pattern in the hilly terrain and not only the sun on black ground.

It was impressive - although only being a penumbral eclipse with the sun only covered by around 82%. A little peak coming over the hills, burning red, on a warm  morning. And the coming up as a small sickle - looking like the moon, but in the morning and in bright red. Took me 3 films in the end, and I was the only of the 15 staying until the very end. Only some overslept ones came close to end ...

Stand up early, Your Mr. Mooseman