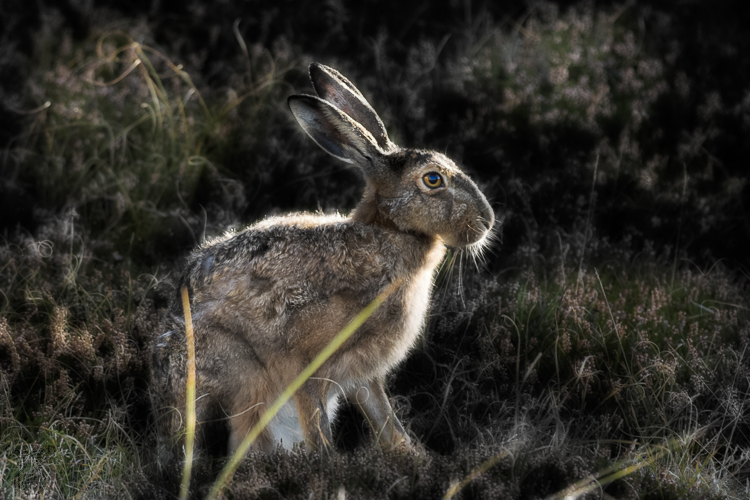 A hare is nothing special. A hare in Denmark close to the sea is - at least for me.

Travelling Denmark for more than 36 years (at least if you count the time when I still visited the country together with my parents), I did not see a hare in the dune landscape. During our visit in September 2007 I realized the creature prowling in far distance around our summer cottage over dunes, between other houses and over the heather-clad ground.

A challenge ! How to do best? 400mm lens grabbed, I tried to get closer - in the beginning no more than taking evidence. Hmmm ... some carots as bribe? Not really working either - not even over night (with regular checks through the cottage window trying to grasp a glance on the hare in the moon-lit dune scenery).

He was fast - I found out when trying to follow him respectively get closer after discovering him again the coming day. Light was perfect. In a much too far distance he sat on the gravel road - another picture only usable for evidence but not satisfying my expectations (which likely is the only problematic part sometimes regarding photography - your own expectations ...)

It took one more day to get some pictures I dare to share on this web - time and persistence helped, and this time it seemed he accepted me (or did he give up ?). I'm sure his eyes tell the story - " Take your picture, crazy guy, if it's your hearts's desire, and then please stop stalking me". I accepted - and never saw him again ...

The picture followed some selective contrast and color alterations to fit another expectation - resulting in another example of my "in art" portfolio.